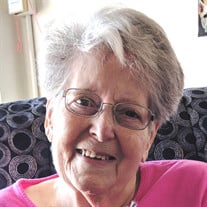 Delores “Dee” Mae Talbott, 85, formerly of McPherson, KS, passed away on Monday, October 8, 2018, at Hillsboro Community Hospital, Hillsboro, KS. Dee owned a clothing alteration business in La Crosse, KS and then was the office manager for the Talbott Insurance Agency.

Private burial of cremains will be held at the Bohemian National Cemetery in Timken, KS and the Excelsior Cemetery near Marquette, KS.

In lieu of flowers, memorial donations may be made to a charity of the donor’s choice in care of Stockham Family Funeral Home, 205 North Chestnut, McPherson, KS 67460. To send flowers or a memorial gift to the family of Delores M. Talbott please visit our Sympathy Store.

To send flowers to the family in memory of Delores M. Talbott, please visit our flower store.
Send a Sympathy Card