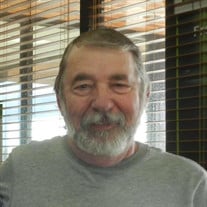 David Earl Willard, 72, passed away Wednesday, March 29, 2017, surrounded by family at his home in McPherson. He was a retired machinist and had worked at Wear Technology. David was also a veteran of the U.S. Marine Corps and had served in the Vietnam War.

He was born May 6, 1944, in Sedalia, Missouri, the son of Paul Wesley and Geraldine R. (Layson) Willard. He graduated from high school in Jefferson City, Missouri. He later attended Central College in McPherson, after being honorably discharged from the Marine Corps.

On February 2, 1969, he was united in marriage to Kathryn J. Folck in McPherson, KS. This marriage was blessed with two children, James Daniel and Rachel Yvette. David enjoyed spending time with his children and grandchildren, and the family enjoyed fishing, camping, sporting events, motocross races, and traveling on vacation. He was a longtime member of American Legion Post #24, McPherson.

David was preceded in death by: his parents; a son, James; a sister, Jeanie Lee Cox; a brother, Jim Wesley Willard; and step-mother, Ruth Willard.

Memorial donations may be given to the Wounded Warrior Project in care of Stockham Family Funeral Home, 205 N. Chestnut, McPherson, KS 67460. To send flowers or a memorial gift to the family of David E. Willard please visit our Sympathy Store.

To send flowers to the family in memory of David E. Willard, please visit our flower store.
Send a Sympathy Card