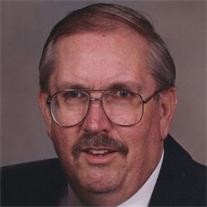 Darryl A. Leffler, 71, of Canton, passed away on Tuesday, August 6, 2013, at Hospice Green House of Youngtown, AZ. He was an accountant for the NCRA Refinery, retiring as the executive treasurer.

He was born on April 15, 1942, in Goessel, KS, the son of Clifford and Della (Barb) Leffler. He graduated from Canton High School and Emporia State University with an accounting degree.

Darryl was a member of the Canton United Methodist Church, Lions Club International, and spent many years on the Canton Township Board.

He was preceded in death by his parents, Clifford and Della Leffler, and wife, Mariam.

The funeral service will be at 10:30 AM, Monday, August 12, 2013, at Canton United Methodist Church with Rev. Sharlan Graber and Minister Orville Koehn officiating. Burial will follow at the Canton Township Cemetery. Visitation will be held from 1:00 to 4:00 PM, Sunday, August 11, at Stockham Family Funeral Home with the family receiving friends from 2:00 to 4:00 PM.

Memorial donations may be given to the Michael J. Fox Foundation for Parkinson's Research in care of Stockham Family Funeral Home, 205 North Chestnut, McPherson, KS 67460. To send flowers or a memorial gift to the family of Darryl Leffler please visit our Sympathy Store.

To send flowers to the family in memory of Darryl Leffler, please visit our flower store.
Send a Sympathy Card