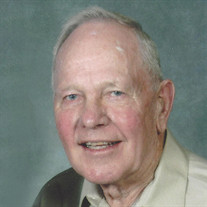 Claude W. Koehn, 88, of Galva, KS, passed away peacefully on Thursday, October 11, 2018, surrounded by family at The Cedars, McPherson. He served in the United States Army during the Korean War. Claude retired after 38 years from the NCRA Refinery where he worked in the Cat Unit and was a welding planner.

He was a member of Galva United Methodist Church.

He was preceded in death by his parents, wife, two brothers, and five sisters.

Memorial donations may be given to Galva United Methodist Church in care of Stockham Family Funeral Home, 205 North Chestnut, McPherson, KS 67460. To send flowers or a memorial gift to the family of Claude W. Koehn please visit our Sympathy Store.

To send flowers to the family in memory of Claude W. Koehn, please visit our flower store.
Send a Sympathy Card