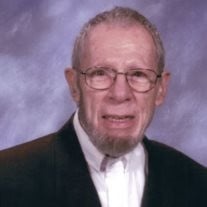 He was active in the Church of the Brethren, the peace movement, and CROP Walk among other things.

Survivors include four daughters and their husbands: Paul and Dorothy Brown Brumbaugh of Joliet, IL; Jim and Winifred Brown Neher of Kechi, KS; Cecilio and Rosalie Brown Falcon of Amarillo, TX; and Dave and Lethia Brown Draves of Decatur, IL; nine grandchildren, and 25 great grandchildren. He was also survived by many nieces and nephews.

A memorial service will be held at 1:30 PM on Sunday March 9, 2014 at the McPherson Church of the Brethren. Burial of cremains will take place at a later date at the Rolla Cemetery in Rolla, Kansas.

To send flowers to the family in memory of Claron Brown, please visit our flower store.