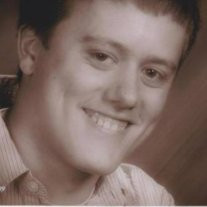 Christopher Bradley Shepard was born May 18, 1990, the second of three sons born to David and Susan (Potter) Shepard, in Portland, OR. He shared his birthday with twin cousins Reid and Greg Hirt, who were born just a few hours after Chris.

Chris attended Peace Church of the Brethren in Portland with his family, and enjoyed his time at Peace Child Development Center as a preschooler. He attended Laurelhurst Elementary School for kindergarten before his family moved to McPherson, KS where he was a pupil at Roosevelt Elementary School, McPherson Middle School, and graduated from McPherson High School in 2009. He attended the Free Methodist Church in McPherson with his family. As a young child, Chris wanted everyone to get along and would go out of his way to encourage his peers to be nice to each other. He was a very giving person and enjoyed making and buying things for others. Chris especially loved family holiday celebrations and getting together with his cousins. Chris was a talented artist, preferring lots of bright colors and especially working with hot glass. Video games with online friends, watching funny animal YouTube videos, and eating chicken strips and pepperoni pizza with Dr. Pepper were also things Chris liked.

Christopher worked in the dining hall at Central Christian College through his high school years. After graduation, he worked for Ferguson Productions on the production floor until he became ill in January of 2013. Chris valiantly fought the genetic cancer with which he was diagnosed and was a huge inspiration to other cancer patients at Cancer Treatment Centers of America in Zion, IL. His bravery and good humor in the face of his disease gave hope to many. In the last few weeks of his life, Christopher's testimony of his trust in Jesus Christ as his Savior encouraged several people to turn to God, and caused others to reexamine and strengthen their faith. He has stars in his heavenly crown.

Christopher Bradley Shepard, aged 23, walked through Heaven's gate on December 30, 2013. His dad and mom were beside him. He is survived by his parents, David and Susan Shepard, brothers, Adam (Emily) Shepard of McPherson and Dylan Shepard of the home. He is also survived by grandmother, Jane C. Shepard of Portland, OR, grandparents, Larry and Judy Potter of McPherson, twelve aunts and uncles, 23 first cousins, great-aunts and uncles, plus second and third cousins, all of whom love him dearly and miss him so much. He also leaves behind many loving friends, from growing up years and those he met during his cancer treatment. Chris was preceded in death by his great-grandparents and paternal grandfather, J. Vance Shepard.

The funeral service will be held at the McPherson Free Methodist Church on Friday, January 10, 2014, at 11:00 a.m., conducted by Rev. Deborah Somerville and assisted by Rev. Zach Fleming. Visitation will be Thursday, January 9, from 3:00 to 8:00 PM at Stockham Family Funeral Home with the family receiving friends from 6:00 to 8:00 PM. Interment will be in McPherson Cemetery. The family requests that those attending Christopher's service wear something blue (his favorite color) or something tie-dyed.

Memorial donations are suggested to the McPherson Free Methodist Church youth department or to Cancer Treatment Centers of America's employee-sponsored patient assistance fund in care of Stockham Family Funeral Home, 205 North Chestnut, McPherson, KS 67460. To send flowers or a memorial gift to the family of Christopher B. Shepard please visit our Sympathy Store.

To send flowers to the family in memory of Christopher B. Shepard, please visit our flower store.
Send a Sympathy Card