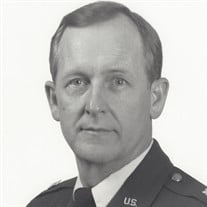 Chuck was born November 13, 1945 in Berwick, PA, the son of Franklin J. and Eleanor L. (Roper) Peters. He was a graduate of Nescopeck High School (Nescopeck, PA), Central College (McPherson, KS), Greenville College (Greenville, IL), and Western Evangelical Seminary (Portland, OR), where he earned a Master of Divinity degree .

On July 4, 1972, Chuck married Colleen M. Vanderhoof at Nescopeck, PA. Mr. Peters was a veteran of the U.S. Air Force enlisting in 1964 after his graduation from high school. He attained the rank of Tech Sergeant, as a crew chief on C-130 cargo planes. Following seminary, he completed Officer's Training and served as a Chaplain until he retired a Colonel in 2005. He served in Vietnam, Desert Storm and Iraqi Freedom at various locations including France, England, Germany, Turkey, Greece, Spain, Thailand, The Philippines, and Qatar.

In addition to his career in the military, Chuck was also an ordained minister in the Free Methodist Church of North America and the Evangelical Covenant Church. He pastored Free Methodist churches in St. Regis Falls, NY; Osborne, KS; Manhattan, KS; Loyal, WI; and Winfield, KS; the Nazarene Church in Herington, KS; and 15 1/2 years at the Covenant Church in Courtland, KS. Chuck taught at Elyria Christian School, Newton Christian High School, and in the Excel program at Central Christian College. His employment at Central also included one year in the Development Office, and 15 years in the maintenance department.

He was preceded in death by his parents, a brother, Harold “Jake” Peters, and a stillborn daughter, Ginger Lee Peters.

A memorial service will be held at 9:30 AM, Monday, June 29, at the Courtland Covenant Church in Courtland, KS. Graveside service with military honors will take place at 3:30 PM (also on Monday) at McPherson Cemetery, with Rev. Tom Mayse officiating.

Memorial donations may be given to the Courtland Covenant Church or Central Christian College of Kansas in care of Stockham Family Funeral Home, 205 N. Chestnut, McPherson, KS 67460. To send flowers or a memorial gift to the family of Charles L. Peters please visit our Sympathy Store.

To send flowers to the family in memory of Charles L. Peters, please visit our flower store.