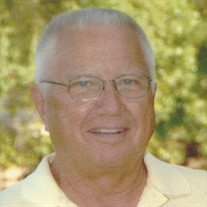 Carroll Dean “Pat” Patrick, 82, of McPherson, KS, passed away peacefully on Friday, November 23, 2018, at The Cedars, McPherson. He was a claims manager for Farmers Alliance Insurance Co., retiring after 30 years. Prior to that, he was a Topeka police officer with the K9 Unit. Pat was also a veteran of the United States Army.

Pat was a history buff and enjoyed hunting, fishing, and spending time with his grandchildren and great-grandchildren. Many summers were spent with his grandkids at Table Rock Lake. He was well known for making fabulous beef jerky, which everyone loved! He was also a member of the Air Capitol Corvette Club.

He is preceded in death by: his parents and his first wife, Beverly.

A private family service will be held at a later date.

In lieu of flowers, memorial donations may be given to Disability Supports of the Great Plains, Hutchinson in care of Stockham Family Funeral Home, 205 North Chestnut, McPherson, KS 67460. To send flowers or a memorial gift to the family of Carroll Pat D. Patrick please visit our Sympathy Store.

To send flowers to the family in memory of Carroll Pat D. Patrick, please visit our flower store.