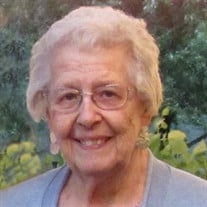 Carol J. Margreiter, age 83, was born March 24, 1935, to Roy and Inez (Oyer) Price in St. Francis, KS. She passed away peacefully on Sunday, June 3, 2018, surrounded by family at MTM Boarding Care Home, McPherson. She was preceded in death by her parents and her husband, Don Margreiter.

Carol and her parents moved to McPherson, KS when she was six years old. She attended all 12 grades in the McPherson schools and graduated from high school in 1953. She also attended McPherson College.

Carol worked at various clerical jobs, including a position at Farmland Industries, over the course of her lifetime.

A private inurnment will be in the McPherson Cemetery. A memorial service will be held at 11:00 AM, Wednesday, June 6, 2018, at Stockham Family Funeral Home.

In lieu of flowers, memorial contributions may be given to the Don Margreiter Scholarship Fund for Canton-Galva students or the McPherson County Humane Society in care of Stockham Family Funeral Home, 205 North Chestnut, McPherson, KS 67460. To send flowers or a memorial gift to the family of Carol J. Margreiter please visit our Sympathy Store.

To send flowers to the family in memory of Carol J. Margreiter, please visit our flower store.