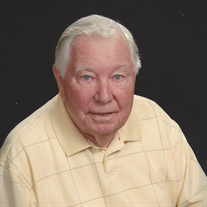 Jim was born on October 7, 1929, in Springfield, Missouri, to Carl and Betty Onken. His early life was spent in Springfield where he graduated from St. Agnes High School. He attended Drury University earning a bachelor’s degree in economics. Jim was a member of Sigma Nu fraternity, past commander and charter member of Omicron Delta Kappa, student body president and earned varsity letters in golf and basketball.

After college, he served in the US Army during the Korean War and was a member of the American Legion and Veterans of Foreign War.

Soon after this service, he worked for Continental Oil Company (Conoco), where he was introduced to the Salyer family of Larned, Kansas, the owners of Salyer Oil Company. This contact led Jim to meet his bride to be, Patsy.

In 1958, he married Patsy Salyer and this union was blessed with three children: Sally, Steve, and Jane.

After his work with Conoco, Jim joined Pioneer Savings and Loan in McPherson, and later became its executive vice-president and managing officer. He so enjoyed this work, as he firmly believed in a person saving their money and also owning their own home. In his later life, he also sold real estate and worked as department manager of sporting goods at Walmart.

Jim also enjoyed golf and the wonderful fellowship the game offered. Patsy would always joke with him that the only reason he liked golf was that they drank beer afterward. He and Patsy also enjoyed fishing, especially at their “cabin” at Marion Lake.

His great love, of course, was his family. He was very proud of the fact that they all earned degrees from Kansas State University. His fondest memories included his children’s accomplishments in high school and in college. He loved tailgating at the KSU football games and celebrating a win in Aggieville. Another fond memory of his was spending Christmases in Larned with Patsy’s mom, Grandma Sally.

Jim was also a past member of the McPherson Chamber of Commerce, the Ambassador’s Club, member and past president of Kiwanis Club, and chairman of the Cancer Society crusade and United Way. He and Patsy were also very proud to be instrumental in the fundraising and building of the new Catholic church in McPherson.

Jim was in the care of the wonderful staff at Angel Arms for the past three years where he developed lasting friendships and enjoyed playing practical jokes on the girls.

He is survived by his children, Sally Anderson of McPherson, Steve Onken of Wichita, and Jane and Jim Lang of Olathe. He was very fond of his five granddaughters, Molly Anderson, Lucy Anderson Hilzer and her husband DJ, Abby Anderson, Alex Lang, and Samantha Lang. He was also recently blessed to meet his first great-granddaughter, Charli Hilzer.

He was preceded in death by his parents and wife.

Visitation will be held on Monday, March 6, 2017, from 5:00 PM to 7:00 PM, with Rosary to follow at 7:00 PM at St. Joseph Catholic Church, McPherson. A Mass of Christian Burial will be celebrated on Tuesday, March 7, at 10:00 AM, at St. Joseph Catholic Church with Father Hien Nguyen officiating. A private burial with Military Honors will be held at McPherson Cemetery.

In lieu of flowers, memorial donation may be given to St. Joseph Church Building Fund or U.S.D. 418 Community Education Foundation in care of Stockham Family Funeral Home, 205 North Chestnut, McPherson, KS 67460. To send flowers or a memorial gift to the family of Carl "Jim" Onken please visit our Sympathy Store.

To send flowers to the family in memory of Carl "Jim" Onken, please visit our flower store.
Send a Sympathy Card