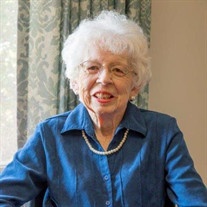 Bonnie Jane (Martin) Ward was born in Dodge City, KS on October 30, 1929, to Emry and Alice (Boyce) Martin. The younger of two children, along with Robert, the family lived in Bloom, KS. After Emry's death, in 1935, Bonnie and Robert moved with their mother to McPherson, KS, where Alice became Registrar at McPherson College. Bonnie graduated from McPherson High School in 1947, and entered McPherson College, graduating in 1951 with a B.A. in History and a teaching certification.

Following graduation, Bonnie taught high school in Canton, KS, until her marriage to John K. Ward in 1953. Three children were born to his union: Martin, Steven and Anne.

In 1968, the family moved to Lincoln, NE, where John was a professor in the Animal Sciences Department at the University of Nebraska, and Bonnie became an administrative assistant in the Mechanical Engineering Department, also at UNL.

Bonnie and John were active in the Antelope Park Church of the Brethren in Lincoln. Bonnie also enjoyed her volunteer work teaching English as a second language to the Southeast Asian community, as a class agent for the McPherson College class of 1951, compiling the history of the Antelope Park Church of the Brethren for its centennial calendar, and playing bridge monthly with friends from the University. Upon their return to McPherson in 1997, Bonnie was the editor of The Village Voice for the Cedars for many years. Several years ago, Bonnie completed the manuscript for 'Prairie Courage', a book about life in rural Kansas in the late 1800s, largely written by her mother more than 50 years earlier, which she and John then published.

Bonnie entered eternal rest on Friday, October 7, 2016, at The Cedars long term care facility in McPherson. She was 86.

Bonnie was preceded in death by her husband, John; her parents; and her brother, Robert.

A memorial service will be held at 11:00 am, Friday, November 11, 2016, at McPherson Church of the Brethren with Rev. Chris Whitacre & Rev. Kathryn Whitacre presiding. A private family inurnment will take place in McPherson Cemetery.

Cards and sympathy notes may be sent to the Ward family in care of Stockham Family Funeral Home. In lieu of flowers, memorial donations may be given to the John and Bonnie Ward Scholarship Fund at McPherson College in care of Stockham Family Funeral Home, 205 North Chestnut, McPherson, KS 67460. To send flowers or a memorial gift to the family of Bonnie J. Ward please visit our Sympathy Store.

To send flowers to the family in memory of Bonnie J. Ward, please visit our flower store.