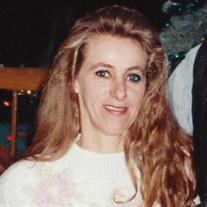 Beverly Ann Eirick, 60, passed away peacefully on Tuesday, November 6, 2018, surrounded by family at her home in Galva, Kansas. She had been a Galva resident since 2008, moving from Grand Island, Nebraska. She had worked as a service technician at Rich & Sons RV Headquarters in Grand Island.

She was born on August 29, 1958, in Hastings, NE, the daughter of Elvin A. and Wilma J. (Smith) Uden. Beverly graduated from high school in Hastings, NE and eventually went on to get a degree in accounting.

She was preceded in death by her parents and husband.

Memorial donations may be given to the Beverly Eirick Memorial Fund in care of Stockham Family Funeral Home, 205 N. Chestnut, McPherson, KS 67460. To send flowers or a memorial gift to the family of Beverly A. Eirick please visit our Sympathy Store.

To send flowers to the family in memory of Beverly A. Eirick, please visit our flower store.