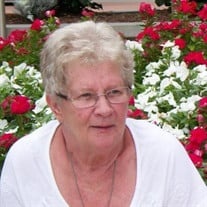 Bette was born on July 15, 1938, at Atkinson, NE, the daughter of Melvin and Alfretta (Spencer) Henderson. She graduated from Gypsum High School. Bette was united in marriage to Leo “Buzz” L. Tillett on May 22, 1954, in Gypsum, KS. She had been a McPherson resident since 1978 and retired from Abbott Labs in January 1999.

She is preceded in death by her parents, Melvin & Alfretta Henderson; husband, Buzz Tillett on August 24, 1997; and daughter, Debra J. Nelson in December 2018.

A private family service is pending.

To send flowers to the family in memory of Bette J. Tillett, please visit our flower store.
Send a Sympathy Card