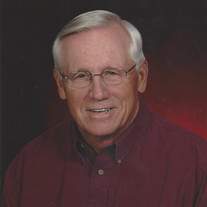 Arthur Glen “Archie” Smith, 77, of McPherson, passed away Tuesday, September 2, 2014, surrounded by his family at Angel Arms in McPherson. He had been a McPherson resident since 2004, moving from Liberty, Missouri.

Archie had a series of jobs over the years including lifeguard, policeman, and working for Mary Carter Paints and Fleischman’s clothing in North Carolina. After moving to Excelsior Springs, MO, he worked for Kroger, A & G Grocery and for several car dealerships including Dixon Ford and Bill Allen Chevrolet. He eventually owned and operated his own dealership, Archie’s Auto Sales in Liberty, MO, before retiring in 2002.

He was born February 2, 1937, in Kansas City, KS, the son of Joseph C. and Margie (Hurd) Smith. He graduated from Clinton High School in Clinton, NC and attended Campbell College in Buies Creek, NC.

Archie was a veteran of the U.S. Marine Corps serving, during the Korean War from 1954 to 1957, attaining the rank of Sergeant (E-4) before his Honorable Discharge. Shortly after leaving the Marine Corps, Archie married Margaret J. Malpass on June 20, 1957 at Dillon, SC.

He was preceded in death by his father, Joseph, his mother, Margie Henderson, a son, Arthur Glen Smith, Jr., and a sister, Mary Cantrell.

The funeral service will be at 11:00 AM Friday, September 5, 2014, at First United Methodist Church with Rev. Kate Johnson Martin and Rev. Harold Nelson officiating. Burial with military honors will be in McPherson Cemetery. Visitation will be from 3:00 to 7:00 PM Thursday at Stockham Family Funeral Home with the family receiving friends from 5:00 to 7:00 PM.

Memorial donations may be given to First United Methodist Church or Angel Arms Residential in care of Stockham Family Funeral Home, 205 N. Chestnut, McPherson, KS 67460. To send flowers or a memorial gift to the family of Arthur G. "Archie" Smith please visit our Sympathy Store.

To send flowers to the family in memory of Arthur G. "Archie" Smith, please visit our flower store.