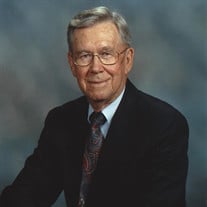 Arnold Loyd Weyand, son of Ernest and Agnes Weyand, was born on May 1, 1922, at the family home northeast of Canton, Kansas. He was raised on the family farm near the border of McPherson & Marion counties and graduated from Roxbury High School in 1940. He attended Bethany College for one year before enlisting in the Army Air Force in 1942 to serve in World War II. Following the end of WWII in 1945, he returned to Kansas and attended the University of Kansas, graduating in February 1949 with a bachelor’s degree in business/accounting. He worked for NCRA (now CHS) for 36 years before retiring in 1984.

On October 14, 1950, Arnold was united in marriage to Marie Roemer in Wichita, Kansas. They were blessed with two daughters, Janet and Carol.

Arnold loved sports…especially KU basketball, reading, playing bridge, and visiting family. He was committed to his family and regularly visited his brother and sisters until they passed.

Arnold passed very peacefully on Saturday, August 4, 2018, at Loving Care in McPherson with his daughters by his side. He was 96.

The funeral service will be held at 11:00 am Friday, August 10, 2018, at the First Christian Church with Reverend Lynn Scott officiating. Arnold’s ashes will be buried in McPherson Cemetery at 9:30 AM, prior to the funeral service.

In lieu of flowers, memorial donations may be given to Meals on Wheels, Salvation Army, or YMCA in care of Stockham Family Funeral Home, 205 N. Chestnut, McPherson, KS 67460. To send flowers or a memorial gift to the family of Arnold L. Weyand please visit our Sympathy Store.

To send flowers to the family in memory of Arnold L. Weyand, please visit our flower store.
Send a Sympathy Card