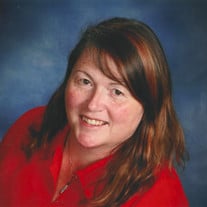 Annette “Nettie” D. Fiedler, 58, of McPherson, KS, passed away peacefully on Tuesday, February 26, 2019, surrounded by family at her home in McPherson. She worked at Walmart as a customer service manager and formerly had worked at TG&Y and in the St. Joseph School cafeteria.

Annette was born on April 19, 1960, in Wichita, KS, the daughter of Anthony Carl Fiedler, Sr. and Geraldine “Gerry” Catherine (Leiker) Fiedler. She graduated from McPherson High School in 1978 and later from Brown Mackie Business College.

She was a member of St. Joseph Catholic Church, McPherson.

A Mass of Christian Burial will be celebrated at 10:30 AM, Friday, March 8, at St. Joseph Catholic Church with Fr. Ben Shockey officiating. Burial will follow at McPherson Cemetery.

Memorial donations may be given to St. Joseph Catholic Church or the Annette Fiedler Memorial Fund (make checks payable to Amy Anderson) in care of Stockham Family Funeral Home, 205 North Chestnut, McPherson, KS 67460. To send flowers or a memorial gift to the family of Annette D. Fiedler please visit our Sympathy Store.

To send flowers to the family in memory of Annette D. Fiedler, please visit our flower store.
Send a Sympathy Card