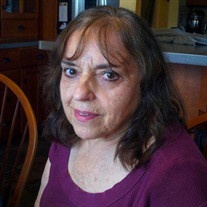 Ann Marie Williamson Danford, 81, of Newton and formerly of McPherson and Wichita, passed away on Friday, March 20, 2015, surrounded by family at Harry Hynes Hospice Center, Wichita. She was a medical transcriptionist for Wichita Clinic and a legal secretary for the law offices of Jack Bowker and Robert Stover.

Ann was born on April 7, 1933, in Summit, NJ, the daughter of John Anthony and Angelina Teresa (Gisoldi) Martini. She graduated from Summit High School (New Jersey). Ann was united in marriage to David H. Williamson in 1953. They later divorced.

She was a member of Word of Life Church, Wichita.

She was preceded in death by her parents and a brother, Nicholas Martini.

Memorial donations may be given to Word of Life Jail Ministry in care of Stockham Family Funeral Home, 205 North Chestnut, McPherson, KS 67460. To send flowers or a memorial gift to the family of Ann M. Danford please visit our Sympathy Store.

To send flowers to the family in memory of Ann M. Danford, please visit our flower store.
Send a Sympathy Card