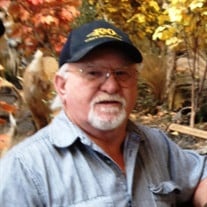 Al was born on December 28, 1942, in Hays, KS, the son of Albert and Florentine (Bieker) Davis. During his early years, he was raised on a farm outside of Schoenchen and graduated from Larned High School. He joined the Army in 1964 and served six years in the National Guard.

On December 28, 1966, Al was united in marriage to Dolores “Dee” Diane Nicholson in Larned, KS. This union was blessed with four children, Chris, Frank, Alicia, & Diane.

Al worked at Safeway as a produce manager, Kit Manufacturing, Pyle Construction as a heavy equipment operator and plumber, and retired from General Air Plumbing and Heating in 2006.

One of his favorite pastimes was golfing with his brother, Ron, in Sterling. He loved outdoor sports, which included camping, boating, fishing, shooting, and hunting. He especially enjoyed playing with his kids, grandkids, and great-grandkids. They will always remember the spur of the moment trips.

He was preceded in death by: his parents, Albert & Florentine Davis; two brothers, Rick Davis and Lynn Davis; and son, Chris Davis.

Memorial donations may be given to McPherson County Humane Society or the American Legion Post #24 in care of Stockham Family Funeral Home, 205 North Chestnut, McPherson, KS 67460. To send flowers or a memorial gift to the family of Allison F. Davis please visit our Sympathy Store.

To send flowers to the family in memory of Allison F. Davis, please visit our flower store.