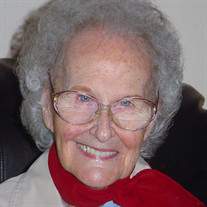 Alice V. Anderson, 96, of McPherson, passed away peacefully on Tuesday, December 27, 2016, at McPherson Health and Rehab. She was a retired elementary and secondary school teacher, teaching in McPherson County and Wichita for nearly four decades.

Alice was born on April 11, 1920, in Pocomoke City, Maryland, the daughter of Vinal Everett and Susie (Morrisette) Hills. She graduated from Central College and McPherson College. Alice was united in marriage to Edwin T. Pyle, Sr. on December 7, 1945, and later married Wayne L. Anderson on March 27, 1964. Wayne preceded her in death on December 27, 1985.

She was a member of First Church of the Nazarene, Wichita and attended McPherson Free Methodist Church and New Hope Evangelical Church, McPherson.

She was preceded in death by her parents; husbands; three sisters, Bertha Hills, Beatrice Johnson, and Lily May Daniels; a daughter-in-law, Martha Pyle; and a grandson.

Visitation will be held from 3:00 PM to 7:00 PM, Thursday, December 29, 2016, at Stockham Family Funeral Home with the family receiving friends from 5:00 PM to 7:00 PM. The funeral service will be held at 10:30 AM, Friday, December 30, at McPherson Free Methodist Church with Rev. Tom Griffith and Rev. Jim Keil officiating. A private burial will take place at Resthaven Cemetery, Wichita.

Memorial donations may be given to PACOP International Ltd. as Alice donated for water wells, books, and clothing to benefit relief projects in Kenya in care of Stockham Family Funeral Home, 205 North Chestnut, McPherson, KS 67460. To send flowers or a memorial gift to the family of Alice V. (Hills) Pyle Anderson please visit our Sympathy Store.

To send flowers to the family in memory of Alice V. (Hills) Pyle Anderson, please visit our flower store.