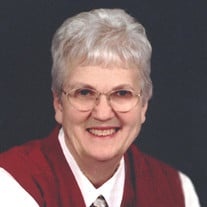 Alice M. Heckethorn was born June 20, 1935, in Osakis, Minnesota, to H.J. and Calista Kerneghan. Alice graduated from Morris (MN) High School in 1953 and received a degree in Nursing from Hamline University, St. Paul, in 1956. She worked as a nurse in the Twin Cities until her marriage to Harry Heckethorn, Jr. on June 6, 1959.

The couple spent the first year of their marriage in St. Louis, MO, and then settled in McPherson, KS. Four children followed. Alice returned to nursing at McPherson’s Memorial Hospital until retirement. She was an active member of Amity Club and participated in a variety of civic and educational activities.

The family will receive friends from 6:00 PM to 8:00 PM, Wednesday, September 25, 2019, at Stockham Family Funeral Home. Final resting place will be at the McPherson Cemetery. Memorial donations will be may be given to McPherson County Humane Society, the American Stroke Association, or Planned Parenthood in care of Stockham Family Funeral Home, 205 N. Chestnut, McPherson, KS 67460. To send flowers or a memorial gift to the family of Alice M. Heckethorn please visit our Sympathy Store.

To send flowers to the family in memory of Alice M. Heckethorn, please visit our flower store.