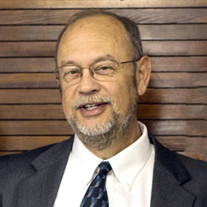 Alan K. Beam was born May 16, 1954, in McPherson to Royce and Phyllis Beam, the oldest of four siblings. He attended Elyria Grade School through 8th grade. He continued his education at McPherson High School and graduated from Kansas State University in Ag Economics in 1977.

Alan loved growing up on a farm and all the experiences that came along with farm life: wheat harvest, baling hay, showing livestock at the fair, operating equipment, milking cows, swimming in the pond, shooting sparrows in the barn, and witnessing calves being born. A favorite haven of Alan’s was Turkey Creek that runs a half mile west of the farm, where he enjoyed exploring, hunting and fishing. This love of nature continued throughout his life. Country living was in his blood, and he frequently checked in with his dad or brother, Neal, to see how things were doing on “the farm”.

What began as wrestling matches between brothers on the living room floor, became his school sport from junior high through high school. Alan led the way and watched both of his brothers follow in his footsteps. Through high school, his interests expanded to motorized toys. Modified lawn mowers, minibikes, go-karts, and motorcycles ultimately led to cars. He was incredibly proud of his 1966 Chevy Chevelle SS. The mere mention of that car would bring a smile to his face and the stories would begin. Classic, new, or somewhere in between, he had a soft spot for automobiles which drew him to his lifelong career in auto sales.

During his career, he worked at various auto dealerships in Wichita and Hutchinson. Alan was a born salesman. No question! He could strike up a conversation with just about anyone, loved connecting with people and learning their stories. A great storyteller, Alan had an amazing memory and was the family historian; although his family was never sure how much he stretched the truth. They will surely miss being able to ask their eldest sibling, “hey, what about...”. One of his favorite activities was getting the family together to play family trivia with questions he’d written. Family was important to him, and it nearly broke his heart when Lisa and family moved to North Carolina.

For over thirty years, Alan and Kathy Zaremba were a team. They worked, laughed, and loved together. Their happiest years were spent on their rural property north of Burrton, Kansas. They had a menagerie of pets and farm animals, and Alan had a special fondness for dogs, a Beam family trait. Kathy always put Alan first and was a welcome addition to his family, particularly when she put her culinary skills to use. Alan never had to wonder where his next meal would come from or who would be by his side. Kathy was Alan’s ultimate caregiver, from beginning to end.

In recent years, he struggled with multiple health issues. He endured many physical setbacks with determination and optimism, always motivated to attend the next family event. For his 60th birthday, he returned to Elyria Grade School to celebrate with his family and friends. (a perfect day, in Alan’s eyes.) Alan will be remembered as a devoted partner, loving brother, crazy uncle, and loyal friend.

A memorial service will be held on Saturday, March 25, at 2:00 PM at the McPherson Church of the Brethren. To send flowers or a memorial gift to the family of Alan Kent Beam please visit our Sympathy Store.

To send flowers to the family in memory of Alan Kent Beam, please visit our flower store.
Send a Sympathy Card