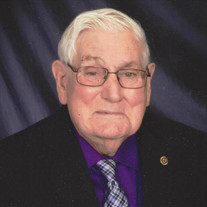 William “Bud” Ellsworth Starr, 92, of McPherson, KS, passed away peacefully on Sunday, August 11, 2019, at McPherson Health & Rehab. He was a truck driver for Kansas Transport from 1955 to 1970 and worked for McPherson Concrete where he was the Redi-Mix plant operator. After retirement, he delivered flowers and medicine for Dillons. Bud was born on March 19, 1927, in Nevada, MO, the son of Ulysses Earl and Nellie Leta (Kennedy) Starr. He went to school in Clyde, KS and did correspondence classes through American High School, where he graduated 12th grade. During WWII, he served in the Navy from 1944 to 1946 and then served in the Navy Reserve from 1946 to 1950. He served in the Army from 1950 to 1953 during the Korean War and the Army Reserve from 1953 to 1956. On November 27, 1949, Bud was united in marriage to Mildred “Millie” J. Meyer in Washington, Kansas. This union was blessed with three children, Susan, Lyle, and Connie. He was a member of First Baptist Church where he served as Trustee. He was also a member of Masonic Lodge #172, B.P.O.E. #502, V.F.W. Post #2715, and American Legion Post #24. He also delivered Meals on Wheels. Survivors include: his loving wife of 69 years, Millie of the home; three children, Susan Johnston (Steve) of McPherson, KS, Lyle Starr of McPherson, KS, and Connie Grennan of McPherson, KS; sisters, Helen Norris of Overland Park, KS and Jane George (Howard) of Springdale, AR; brother, Larry Starr (Annette) of Concordia, KS; six grandchildren, Heath Starr (Kristi) of Overland Park, KS, Aaron Starr (Jennifer) of Olathe, KS, Sam Starr (Alison) of Kodiak, AK, Madeline Shepherd (Jeremy) of Dallas, TX, Ethan Grennan of Hays, KS, and Alexander Grennan of McPherson, KS; four great-grandchildren, Knox & Kate Starr and Abrielle & Preston Starr; and numerous nieces, nephews, and extended family. He was preceded in death by his parents and sister, Wilma Monty. The family will receive friends from 5:00 PM to 7:00 PM, Thursday, August 22, 2019, at Stockham Family Funeral Home. The funeral service will be held at 10:00 AM, Friday, August 23, at First Baptist Church with Pastor John Pattison officiating. Burial with Military Honors will follow the service at McPherson Cemetery. Memorial donations may be given to Meals on Wheels or First Baptist Church in care of Stockham Family Funeral Home, 205 North Chestnut, McPherson, KS 67460.

The family of William E. Starr created this Life Tributes page to make it easy to share your memories.

Send flowers to the Starr family.