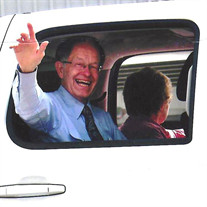 H. Wayne Ford, 74, of Galva, KS, passed away peacefully on Sunday, July 21, 2019, with his wife by his side at their home in Galva, KS. Wayne was the former Vice-President of W-R Milling Company, McPherson, where he had worked for 49 ½ years. Wayne was the City of Galva Mayor, serving the community from 1977 to 2019. Many notable projects were completed by the City of Galva under Wayne’s leadership. Wayne was born on August 23, 1944, in El Dorado, KS, the son of Herman E. and Ruby Fay (Thoroughman) Ford. He graduated from McPherson High School in 1962 and attended Omaha Bible College. He served in the United States Army during the Vietnam era from 1963 to 1965. Wayne was united in marriage to Naomi Arlene Anders on May 15, 1966, in McPherson, KS. He was a member of the First Baptist Church, McPherson. He served on numerous boards and organizations throughout his lifetime. Some of these included being the chairman of the McPherson County Law Enforcement Center Building Committee, the treasurer and secretary for McPherson County Crime Stoppers, and serving on the board for McPherson County Solid Waste Utility. He generously gave his time and expertise to his beloved community. Survivors include: his loving wife of 53 years, Naomi of the home; sister, Cheryl Knackstedt (Wes) of Boulder, CO; three brothers-in-law, Herb Johnson of McPherson, KS, David Anders (Myrtle) of Wichita, KS, and Daniel Anders (Louise) of Coolidge, AZ; sister-in-law, Lydia Schlundt (Walt) of Vestal, NY; several nieces & nephews; and two beloved dogs, Pooh Bear and Candy Dog. He was preceded in death by: his parents, Herman and Ruby Ford; sister, Joan Johnson; and his beloved canine work buddy, Tigger. Visitation will be held from 5:00 PM to 7:00 PM, Friday, July 26, 2019, at Stockham Family Funeral Home. The funeral service will be held at 1:00 PM, Saturday, July 27, at the First Baptist Church, McPherson. Burial with Military Honors will follow at Empire Cemetery, Galva. Following the burial, the family extends an invitation for all to join them for a reception at the Galva Community Center. Memorial donations may be given to the First Baptist Church, McPherson County Crime Stoppers, or Galva Fire Department in care of Stockham Family Funeral Home, 205 North Chestnut, McPherson, KS 67460.

H. Wayne Ford, 74, of Galva, KS, passed away peacefully on Sunday, July 21, 2019, with his wife by his side at their home in Galva, KS. Wayne was the former Vice-President of W-R Milling Company, McPherson, where he had worked for 49 ½ years.... View Obituary & Service Information

The family of Wayne Ford created this Life Tributes page to make it easy to share your memories.

Send flowers to the Ford family.