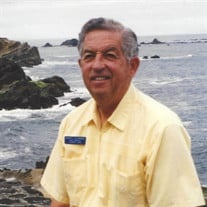 Monroe was born December 20, 1928, to James Frank Hughbanks and Vivian Esther (Hunt) Hughbanks in a farm home west of Anthony. His early education was in country schools through 8th grade, then on to Attica High School, graduating in 1947.

Monroe attended K-State for one semester and then transferred to Asbury College in Kentucky to prepare for Christian ministry and teaching. He graduated in 1952. In 1948, he married Corinne Neubauer and took her back to Asbury with him where she graduated in 1953. Monroe pastored a three-point charge for the Methodist Church and taught country school while Corinne finished her degree.

Together, they served in mission work for eight years in McAllen, Texas and Saltillo, Coahuila, Mexico. In 1961, they returned to the USA and began teaching in the Buhler school district, Monroe in east Hutchinson and Corinne in Buhler. Then in 1964, he was offered a teaching position at McPherson College. By then, he had completed his master’s at Emporia. This turned out to be a 29 year position.

Sabbatical leaves at the college helped both of them finish their doctorates, he in 1971 and she in 1980. During this time, they sponsored two Guatemalan boys (brothers) to Asbury College; Otto Solorzano in 1978 and Aroldo Solorzano in 1980. They became a part of the family and both graduated and earned scholarships to complete their master’s degrees. Other sabbaticals found them teaching at the Universidad Evangelica Boliviana in 1987. This allowed them to visit Brazil, Argentina, and Paraguay. Summers allowed them to be very active in mission work with Teen Missions International on work teams. Monroe was head leader for teams going to Finland, Bolivia, and Poland. Interterms at McPherson College also gave them opportunities to travel with student groups, specifically to Mexico, Guatemala, Costa Rica, and New Mexico. One interterm at McPherson College, he worked with Habitat for Humanity building cement block homes in Guatemalan highlands for the Mam Indians.

While teaching at McPherson College, Monroe also pastored the Monitor Church of the Brethren. For 22 years, he served as an “interim pastor” and loved those parishioners very much. He felt he was greatly blessed by those farm families and learned much from them.

Upon retiring from McPherson College in 1993, Monroe served as bookkeeper for the Brethren Colleges Abroad program in Barcelona, Spain while Corinne was assistant director. This year-long experience gave them many opportunities to visit multiple countries in Europe. All together, they have visited 34 different countries in the Western Hemisphere and Europe, plus Israel.

Upon returning from Spain, Prudent Tours hired them as tour directors, basically in the USA and Canada. This experience gave them the opportunity to visit many provinces and states and to meet wonderful people.

Monroe considered this work with Prudent a ministry. He led devotions every morning on the tour bus for the very mixed-denominational group. He led tours for eleven plus years. Finally, health concerns caused him to retire.

In 1998, the Hughbanks moved to the Cedars Village where they lived for 16 years before moving to assisted living and eventually to the health care unit last year. Monroe has blessed many lives through his work and his ministry.

Memorial donations may be given to World Gospel Mission, Heifer International, or McPherson Free Methodist Church in care of Stockham Family Funeral Home, 205 North Chestnut, McPherson, KS 67460. To send flowers or a memorial gift to the family of W. Monroe Hughbanks please visit our Sympathy Store.

To send flowers to the family in memory of W. Monroe Hughbanks, please visit our flower store.