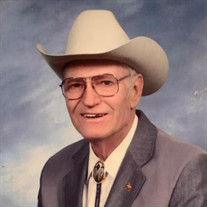 Virgul W. Bengston, 84, the son of John William and Hildur Caroline (Ekholm) Bengston, was born January 13, 1937. He was one of 7 born to this union. Virgul attended Windom Grade School and graduated from Windom High School in 1955. He was an outstanding basketball player and never, ever, missed any of his class reunions once he graduated. On July 26, 1956, Virgul was united in marriage to his high school sweetheart, Betty Bolton, at Andover Lutheran Church, Windom. The young couple established a home in McPherson and then later would move to their farm near Groveland. This union was blessed with 3 children, Pamela, Connie and Kevin. They attended and were members of Andover Lutheran Church, where Virgul had been baptized. He served his church in many capacities through the years, and later in life served on the cemetery board. This became his passion, and with his good friend Vernon, took special pride with the upkeep of the cemetery. On Sept. 18, 1978, Virgul married Carole V. (Bundy) McNutt at Emanuel Lutheran Church, Hutchinson, with all their kids in attendance. Two step kids were now added to Virgul’s family, Jim and Kathy McNutt. Carole had been raised on a farm and loved the country life. She enjoyed helping Virgul with the cattle, hauling grain, or bringing out meals during harvest. Their special union would last almost 43 years. Virgul worked at NCRA in McPherson for 38 years. First on the tank cars and then ended up driving heavy equipment. He was able to retire at the early age of 56 and could now spend all of his time on the farm. He would help his neighbors with their harvesting, tinker in his shop, visit his elderly friends, or go fishing anytime he wanted. They both enjoyed camping, and could now go anytime with their friends. Virgul was a great welder, and welded the entire corral at the farm. But most of all, he enjoyed watching his 2 grandsons play basketball. Going to State with them twice was something he would never forget. He loved all sports, and enjoyed watching his 4 granddaughters compete in volleyball, softball or music events. He tried never to miss. Virgul and Carole attended Emanuel Lutheran Church, Hutchinson and was an associate member of Andover Lutheran. He was a faithful Christian, the most caring and loving husband, father, grandpa, brother, uncle, neighbor and dear friend, He had a way with people and always had a smile on his face. He could start a conversation with anyone he met. He was a special friend to so many people. He touched the hearts of many and will be greatly missed. Virgul died at 2:55 on Thursday, June 24 at Hutchinson Regional Hospital, after a hard battle with COVID. His last 24 hours were spent surrounded by his family either present or via internet. He was preceded in death by his parents, brothers, Chester, Evert and Arvid Bengston. Sisters, Gloria Plooster and Carolyn Hanna, daughter-in-law Kim Bengston, and stepson, James McNutt. Survivors include: his loving and devoted wife, Carole of the home; children, Pam (Darrel) Thiessen, Connie (Scott) Achilles, and Kevin (Mary Sneath) Bengston, all of Inman; step daughter, Kathryn (Pat) Kendrick of Hesston, a brother, Willard (Joyce) Bengston of Windom; 11 grandchildren; 14 great grandchildren; and many nieces and nephews who were near and dear to his heart, other relatives and a host of friends. The graveside service will be held at 10:00 AM Monday, July 5, 2021 at Andover Cemetery (Windom, KS) with Rev. Tim Carey officiating. Family and friends are welcome to bring lawn chairs. In lieu of flowers, memorial donations may be given to Emanuel Lutheran Church or Hospice & Homecare of Reno County, in care of Stockham Family Funeral Home, 205 North Chestnut, McPherson, KS 67460.

Virgul W. Bengston, 84, the son of John William and Hildur Caroline (Ekholm) Bengston, was born January 13, 1937. He was one of 7 born to this union. Virgul attended Windom Grade School and graduated from Windom High School in 1955. He was... View Obituary & Service Information

The family of Virgul W. Bengston created this Life Tributes page to make it easy to share your memories.

Send flowers to the Bengston family.