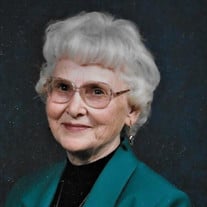 Virginia R. Hunt, 96 of Junction City, KS and formerly of Beaver City, NE, passed away peacefully on Thursday, November 18, 2021, at Harmony Home in McPherson, KS. She was born on June 2, 1925, in Pawnee County, NE, the daughter of Ralph Lewis and Lillian Josephine (Novotny) Stepan. She graduated from Peru (Nebraska) High School and received her associates degree in business from Nebraska Business Institute. Virginia was united in marriage to Howard E. Mortensen on June 15, 1947. He preceded her in death on July 6, 1972. She married Lee Allen Hunt on May 18, 1974, and he passed away on May 16, 1995. She lived most of her adult life in Beaver City where she and her husband, Howard, owned and operated the Gambles Hardware store for 38 years. After Howard’s death, she continued to operate the store until her retirement in 1992. She was always willing to lend a helping hand to Lee on his farming operation. In addition, she was very active in the Beaver City community where she was a member of the Red Hat Society, VFW Auxiliary, American Legion Auxiliary, Methodist Women’s Club, Faith Community Church, and Chamber of Commerce. After her retirement, she was always ready to ferry friends to doctor appointments, travel anywhere, go on cruises, and she once visited her ancestral homeland of Old Czechoslovakia. Survivors include three children, Vivian Gaughan (Mike) of Hollywood, FL, Kenneth Mortensen (Marcia) of Junction City, KS, and Donna Rhine (Barry) of Hollywood, FL; four grandchildren, Jeffrey Mortensen, Jill Mortensen, Jason Rhine, and Aaron Rhine; and seven great-grandchildren. She was preceded in death by her parents, husbands, and four sisters, Betty Stepan, Dorothy Stepan, Evelyn Neve, and Valasta (Sis) Stepan. A service will be held at a later date. Memorial donations may be given to Faith Community Church (Beaver City, NE) or the Josef Stepan Family Foundation in care of Stockham Family Funeral Home, 205 North Chestnut, McPherson, KS 67460.

Virginia R. Hunt, 96 of Junction City, KS and formerly of Beaver City, NE, passed away peacefully on Thursday, November 18, 2021, at Harmony Home in McPherson, KS. She was born on June 2, 1925, in Pawnee County, NE, the daughter of Ralph Lewis... View Obituary & Service Information

The family of Virginia R. Hunt created this Life Tributes page to make it easy to share your memories.

Send flowers to the Hunt family.