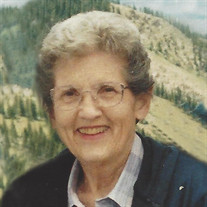 Venetta Lee Nutter, 91, of Salina, KS and formerly of McPherson, KS, passed away peacefully on Sunday, September 30, 2018, at Pinnacle Park Nursing & Rehabilitation Center in Salina. Venetta was born on September 13, 1927, in Canton, KS, the daughter of Walter John and Edith May (Brown) Linsenmayer. The family moved to McPherson in 1943 where she graduated from High School in 1945. Venetta went to work at McPherson Junior High School as principal Dutch Uhrlaub’s secretary and later worked in the Registrar’s office at Wichita State University. She married her life-long sweetheart, James F. Nutter, on May 29, 1949, in McPherson. Upon Jim’s graduation from WSU, the couple stayed in Wichita where Jim worked as a Physical Education teacher and coach. Venetta was happy to be a homemaker and gave birth to their son, Larry James Nutter, in 1958. Venetta was active in the community, serving as Parent Teacher Association (PTA) president at OK Elementary, Hadley Junior High and Wichita North High School. She was an Extension Homemaker Units (EHU) member and president, and Den Mother for her son’s Cub Scout Pack. Venetta enjoyed traveling and rock hunting with her husband Jim. During Christmas holidays, the family would drive to Port Aransas, Texas to fish, pick up shells, and walk the beaches. She was a member of the Wichita Gem & Mineral Society and the McPherson Gem & Mineral Club. Venetta was a member of the Asbury United Methodist Church in Wichita. In 1992, Jim & Venetta moved back to McPherson where they resided until moving to a care facility in Salina in 2013. Jim and Venetta remained devoted to each other through 69 years of marriage, sharing many adventures together traveling across America in their pickup camper. Although both were in private rooms at Pinnacle Park Nursing Home, staff reported that they always managed to find each other in the commons and spend their days together, often holding hands or sharing a snack together. Jim preceded her in death on June 27, 2018. Venetta and Jim had one son, Larry, a daughter-in-law, Johanna, and two grandchildren, Mackenzie and Lucas, whom they enjoyed very much. Venetta is survived by her son and daughter-in-law, Larry & Johanna Nutter of Salina, KS; two grandchildren, Mackenzie & Lucas Nutter of Salina, KS; and sister, Eva Sweeney of Mountain Home, AR. She was preceded in death by her parents; husband; sister, Marcella Drouillard; and brother, Jerry Linsenmayer. Visitation will be held from 3:00 PM to 7:00 PM, Wednesday, October 3, 2018, at Stockham Family Funeral Home with family receiving friends from 5:00 PM to 7:00 PM. The graveside service will be at 10:00 AM, Thursday, October 4, at McPherson Cemetery with Pastor Lacey Wheeler officiating. In lieu of flowers, memorial donations may be given to Fisher Center for Alzheimer’s Research Foundation in care of Stockham Family Funeral Home, 205 North Chestnut, McPherson, KS 67460.

The family of Venetta L. Nutter created this Life Tributes page to make it easy to share your memories.

Venetta Lee Nutter, 91, of Salina, KS and formerly of McPherson,...

Send flowers to the Nutter family.