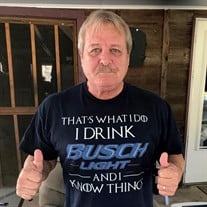 Steven “Steve” Ward Ek was born on May 4, 1951, in McPherson, Kansas, to Galen and Laurel “Jean” Ek. Steve passed away on October 2, 2019, in Many, Louisiana. Steve attended Galva High School where he was a star athlete and proud Chieftain. Post graduation, Steve attended Hutchinson Jr. College and worked for local McPherson companies, namely Kit Manufacturing and Johns Manville, from which he retired in 2003.

Steve was a loving father to Leah Grant (Hutchinson), Justin (Sun Prairie, WI), Heath (Hutchinson), Megan Carter (Ankeny, Iowa) and Tanya Hansarik (Spring, Texas). He enjoyed teaching them the skills of softball/baseball, fishing, frog gigging, craftsmanship, and good fun and humor. He was proud of the adults his children have become and was overjoyed to see they passed on these same skills to his grandchildren. He was never so excited as when he saw his grandkids succeed in any of their activities, be it softball, baseball, swimming, football, art, or school in general. He often times was heard boasting about their accomplishments and was the first to give them high praise for their efforts. Grandpa Steve was their biggest fan.

Steve was united in marriage in 1989 to Tammy Flood and resided in McPherson for several years before retiring to Toledo Bend Lake in Louisiana. Steve called this his happy place. It was the home where he was steps away from the lake, never had to deal with another cold and icy winter, and mastered the art of relaxation.

Steve was preceded in death by his parents; his mother-In-law, Glova Flood; his brother, Brad Ek; and his brothers-In-law, Charlie Wedel and Jimmy “Junior” Flood, Jr.

A graveside service will be held on Sunday, October 13, 2019, at 10:00 AM at Empire Cemetery in rural Galva, Kansas with a celebration of Steve’s life following at the American Legion Hall in McPherson, Kansas. Steve’s family invites his family and friends to join them in the celebration of life event starting at 11:00 AM. A free taco bar and Steve’s favorite beer, Busch Light, will be provided.

In lieu of flowers the family requests donations be made to the Epilepsy Foundation in care of Stockham Family Funeral Home, 205 North Chestnut, McPherson, KS 67460. To send flowers or a memorial gift to the family of Steven W. Ek please visit our Sympathy Store.

To send flowers to the family in memory of Steven W. Ek, please visit our flower store.
Send a Sympathy Card