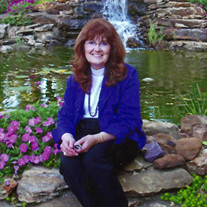 Sheryl Louise White, the eldest daughter of David E. and Doris G. (Becker) Weibert, was born in Goessel, Kansas on February 5, 1945. She passed away in the Newton Medical Center on December 28, 2017, at the age of 72 years after a short battle with cancer. Sheryl grew to womanhood on the family farm in the Durham, Kansas community. She attended the one room country school known as the Warren School, southeast of Durham, for grades 1-5. She attended Durham Grade School for grades 6-8 and graduated from Durham High School in 1962 as class valedictorian. Sheryl accepted Jesus as her savior as a young teenager and was baptized. Sheryl was very active in 4-H and school activities. After completing high school, Sheryl completed the secretarial program at Brown Mackie College in Salina, Kansas. Sheryl was united in marriage to Dennis L. White at the Methodist Church, Canton, Kansas on September 27, 1964. One son and one daughter, David and Susan, were born to this union. Sheryl and Dennis made their home on a farm in western Marion County until they moved to rural McPherson County where Sheryl lived among her beautiful flowers and landscaping until her death. Even though Sheryl was kept busy at one of her several jobs, she enjoyed being with her grand kids at home, playing with them in the yard, or attending their school functions. Sheryl dearly loved landscaping and multiple flower beds. She spent many days and nights planting, pruning and watering her extensive yard. Sheryl might have been at her happiest when she was sharing her lovely home with her family and friends. Purple was probably Sheryl’s favorite color because she was a devoted K-State sports fan! She also closely followed the McPherson Bullpups. Sheryl loved music, especially piano and southern gospel. If Sheryl was in the house, she probably was playing one of her many gospel or piano CD’s. Sheryl was a very hard worker and held several jobs over the years in the Canton and McPherson communities. She is probably best remembered at her position of VP Customer Service in the Home State Bank in McPherson. Sheryl was a stickler on service and customer satisfaction. She retired from the bank on January 3, 2017. Sheryl was always known as a very warm, caring, and kindhearted person. Sheryl was preceded in death by her parents, Dave and Doris Weibert. She is survived by her loving children, David L. (Nancy) White, Mt. Hope Kansas and Susan (Rick) Moscicki, Valley Center, Kansas; grandchildren, Tyler, Brandon, and Jordan White and Matthew and Alex Moscicki; siblings, Marilyn Pierce, Concordia, Kimberly (Steve) Mohan, Topeka, David Weibert, Wichita, and Warren (Carol) Weibert, Manhattan, and many nieces and nephews. A Celebration of Life Service will be held at 10:30 AM, Wednesday, January 3, 2018, at First United Methodist Church, McPherson with Rev. Tim Kraft officiating. In lieu of flowers, the family requests memorials to the McPherson Relay for Life in care of Stockham Family Funeral Home, 205 North Chestnut, McPherson, KS 67460. The family wishes to express their sincere appreciation for the many prayers and acts of kindness shown to Sheryl, David and Nancy, and Susan and Rick during Sheryl’s brief illness and passing.

Sheryl Louise White, the eldest daughter of David E. and Doris G. (Becker) Weibert, was born in Goessel, Kansas on February 5, 1945. She passed away in the Newton Medical Center on December 28, 2017, at the age of 72 years after a short battle... View Obituary & Service Information

The family of Sheryl L. White created this Life Tributes page to make it easy to share your memories.

Send flowers to the White family.