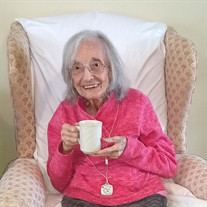 Ruth Lorraine Ratzlaff, 97, of Ottawa, KS and formerly of McPherson, KS, passed away peacefully on Monday, May 20, 2019, at AdventHealth Hospital in Ottawa, KS. Ruth was born on June 13, 1921, in her family home at Ottawa, KS, the daughter of Charles S. and Lela Belle (Reneau) Williamson. She graduated from Ottawa High School in 1939 and later from Central Christian College, McPherson. In the mid-30s, during the Great Depression, Ruth and her family had a coal and salvage business. Her family, along with the majority of other people during this time period, was poor. During the winter, everyone needed coal in the bitter cold weather. Ruth’s dad was very generous during this time and often would hand out gunny sacks of coal to others so they’d have enough fuel to keep their family warm. Ruth’s mother grew a garden and often shared it with others. Ruth inherited this trait of generosity to others. Ruth was united in marriage to Carl W. Ratzlaff on June 12, 1949, in Ottawa, KS. The young couple resided in Inman, KS, Carl’s hometown, and Newton, KS for a few years before making their home in McPherson, KS in 1950. Carl worked at the N.C.R.A. Refinery until his retirement. Ruth taught many grades of elementary school in the McPherson area until her retirement. Carl preceded her in death on March 18, 2009. After retirement, Ruth worked as a volunteer in the hospital gift shop for McPherson Hospital Volunteer Services. She received an award for 20 plus years volunteering for the hospital. She later volunteered at the McPherson Save ‘N Share, a church affiliated second hand store. Ruth was a longtime member of McPherson Free Methodist Church. In December of 2013, Ruth moved to Vintage Park in Ottawa, KS to be close to her sister, Lena Belle, and niece, Kelly. Survivors include: several nieces and nephews, including Kelly Moore of Ottawa, KS and Mike (Lucille) Moore of Colorado Springs, CO; sister-in-law, Lorena Williamson of Lawrence, KS; and other extended family and friends. She was preceded in death by her parents, husband, and siblings, Nancy Broers, Lena Belle Moore, and Chuck Williamson. The funeral service will be held at 2:30 PM, Thursday, May 23, 2019, at Stockham Family Funeral Home with Rev. Dean Smidderks officiating. Burial will follow at North Inman Cemetery, Inman, KS. Memorial contributions may be given to McPherson Free Methodist Church in care of Stockham Family Funeral Home, 205 North Chestnut, McPherson, KS 67460.

Ruth Lorraine Ratzlaff, 97, of Ottawa, KS and formerly of McPherson, KS, passed away peacefully on Monday, May 20, 2019, at AdventHealth Hospital in Ottawa, KS. Ruth was born on June 13, 1921, in her family home at Ottawa, KS, the daughter... View Obituary & Service Information

The family of Ruth L. Ratzlaff created this Life Tributes page to make it easy to share your memories.

Ruth Lorraine Ratzlaff, 97, of Ottawa, KS and formerly of McPherson,...

Send flowers to the Ratzlaff family.