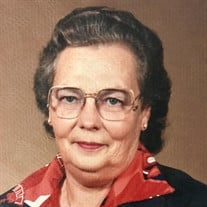 Rozella “Rosie” (Becker) Chapman, 91, of McPherson, passed away peacefully on Monday, May 22, 2017, with family by her side at Brookdale of McPherson. She was co-owner of Becker Nursing Home and Hickory Manor Nursing Home. She also worked as a waitress in several local cafes.

Rozella was a member of the First Baptist Church and V.F.W. Auxiliary.

The visitation will be held from 3:00 PM to 7:00 PM, Friday, May 26, 2017, at Stockham Family Funeral Home with the family receiving friends from 5:00 PM to 7:00 PM. The funeral service will be held at 10:00 AM, Saturday, May 27, at First Baptist Church with Rev. Andrew Currier officiating. Burial will follow at McPherson Cemetery.

Memorial donations may be given to First Baptist Church or Hospice & Homecare of Reno County in care of Stockham Family Funeral Home, 205 North Chestnut, McPherson, KS 67460. To send flowers or a memorial gift to the family of Rozella "Rosie" Chapman please visit our Sympathy Store.

To send flowers to the family in memory of Rozella "Rosie" Chapman, please visit our flower store.