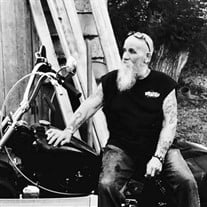 “Ronnie Mac” Lee McIntire, 65, of McPherson, KS, passed away peacefully on Saturday, June 23, 2018, surrounded by family at his home in McPherson. Ronnie worked in construction and carpentry. He also was a heavy equipment operator and welder. He was born on October 7, 1952, in McPherson, KS, and attended the McPherson schools. On November 29, 1997, he was united in marriage to Joyce Christensen in McPherson, KS. Ronnie Mac or “Fat Mac” was a huge motorcycle enthusiast. He may have appeared rough on the outside, but he had a gentle soul and heart of gold. He was a dog and cat lover. Being well known in the community, he was loved by many. Ronnie Mac loved his family dearly and would give the shirt off his back to help them or anyone in need. He was a devoted husband to Joyce and will be dearly missed. Survivors include: his wife, Joyce of the home; daughters, Calista “Chrissy” (McIntire) Rhodes of Rowlett, TX and Erin Renee Bates of McPherson, KS; Godson, Tim Nuss of Belton, MO; former wife and dear friend, Gloria Hammond; brother, John Green; grandchildren, James Rhodes, Haylee Rhodes, Graci Kerj, and Aeris Popp; great-grandchildren, Jaxson and MaciMae Rhodes and Castiel Christensen; numerous nieces & nephews; and many friends. He was preceded in death by: his parents, Alfred McIntire and Dusky “The Old Man” Green & Betty J. Green; brother, Dick McCloskey; and sister, Lori Tucker. A Celebration of Life will be held at a later date. In lieu of flowers, memorial donations may be given to offset funeral expenses and made payable to Stockham Family Funeral Home, 205 N. Chestnut, McPherson, KS 67460.

&#8220;Ronnie Mac&#8221; Lee McIntire, 65, of McPherson, KS, passed away peacefully on Saturday, June 23, 2018, surrounded by family at his home in McPherson. Ronnie worked in construction and carpentry. He also was a heavy equipment operator... View Obituary & Service Information

The family of Ronnie Mac McIntire created this Life Tributes page to make it easy to share your memories.

Send flowers to the McIntire family.