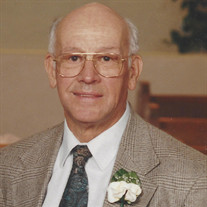 Ronald B. Hadduck, son of Thomas A. and Laura O. (Mellinger) Hadduck, was born March 13, 1929, in Kutch, Colorado. He was the youngest of three sons, which included brothers, Thomas and Gerald. The Hadduck family moved to Cañon City, CO in 1933 when Ronald was almost four years old, and he began helping around the family dairy farm at age seven. Ronald enrolled at Central Academy in McPherson, KS in 1947 and graduated in 1948. He met Carol Ruth King at Central, and they began dating early in the school year and they were engaged shortly thereafter. They had actually been close friends since they were three years old. Ronald and Carol were married on May 7, 1949 in Denver, CO. This marriage was blessed with five children. As a young man, Ronald delivered milk for his father’s Golden Rule Dairy, and for a short time, he drove a milk truck for Sinton Dairy. Ronald drove a semi-truck for a year and then began his own drywall business, which he operated for 53 years. He moved his family and business, Custom Drywall, to Sioux Falls, SD in 1960, and then to McPherson, KS in 1976. Ronald and Carol have made their home at Pine Village in Moundridge since 2010. Ronald entered peacefully into eternal rest on Sunday, April 8, 2018, at Pine Village in Moundridge. He was eighty-nine. Survivors include: his wife of 68 years, Carol Ruth Hadduck; four children, Barbara Bland (Don) of McPherson, KS, Patty Shorb (Hubert) of Wichita, KS, Kevin Hadduck (Linda) of Helena, MT, and Carolyn Holmes (Stuart) of Tribune, KS; a brother, Gerald Hadduck (Mary) of Westminster, CO; 17 grandchildren and 17 great-grandchildren. He was preceded in death by his parents, his older brother, Tom, and his daughter, Rhonda Munce. Visitation will be from 3:00 to 7:00 PM Tuesday, April 10, at Stockham Family Funeral Home, with the family receiving friends from 5:00 to 7:00 PM. Committal service and burial will be at 9:00 AM Wednesday, April 11, at the Mound Township Cemetery, Moundridge, followed by a memorial service at 11:00 AM at the Free Methodist Church in McPherson. Rev. Tom Griffith will officiate the service. Memorial donations may be given to the Free Methodist Church or Central Christian College c/o Stockham Family Funeral Home, 205 N. Chestnut, McPherson, KS 67460.

Ronald B. Hadduck, son of Thomas A. and Laura O. (Mellinger) Hadduck, was born March 13, 1929, in Kutch, Colorado. He was the youngest of three sons, which included brothers, Thomas and Gerald. The Hadduck family moved to Cañon City, CO in... View Obituary & Service Information

The family of Ronald B. Hadduck created this Life Tributes page to make it easy to share your memories.

Send flowers to the Hadduck family.