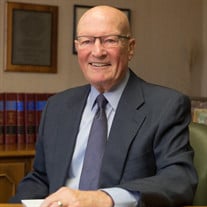 Robert W. “Bob” Wise, age 86, passed away Wednesday, January 6, at KU Medical Center, Kansas City. Bob was born April 15, 1934 to Jake and Ruth Wise and raised on a farm in Fernald, Iowa. Bob graduated from high school in 1952 and moved to McPherson to attend McPherson College and play football. He received his bachelor’s degree from McPherson College in 1956, married his college sweetheart, Anita McSpadden, and coached football before moving to Washington, DC for law school. He received his law degree, with honors, from George Washington University in 1961. While in law school, he worked as a Special Agent for the Office of Naval Intelligence and was a member of the board of editors of the George Washington University Law Review. Bob loved the practice of law and his partners and was proud of his firm’s 135 year history. He was an active member of the McPherson law firm Wise & Reber L.C. at his death. He practiced for 60 years in the areas of litigation, business, banking, trusts and estates, arbitration and mediation and never considered retirement. He was past president of the Kansas Bar Association, past chair of the KBA Ethics Grievance Panel, and was a recipient of the KBA’s Professionalism Award, its Outstanding Service Award and the Kansas Bar Foundation Robert K. Weary Award. He was also a past member of the State Board of Law Examiners, Kansas Annual Survey Committee and was a fellow of the Kansas Bar Foundation. Bob was universally respected by Kansas lawyers and represented thousands of clients. Bob served as an unseen advisor to city and county leaders throughout his career and was instrumental in creating a forward thinking political and business culture in McPherson. As president of the McPherson Industrial Development Company, (“MIDC”), Bob was instrumental in recruiting two of McPherson’s flagship industries, Sterling Drug, now Pfizer Pharmaceutical, and Johns Manville. Bob served on the MIDC Board for nineteen years and as President for nine years. During his tenure as President, McPherson’s industrial base enjoyed remarkable growth and expansion. Bob also influenced the retail sector with his work on behalf of the Chamber of Commerce as President. Bob has held numerous volunteer positions including President of the McPherson United Way and as a member of the Memorial Hospital Board of Directors. He led a significant hospital expansion as Chair of the New Building Committee. Bob was a long time champion of local educational institutions, McPherson College and Central Christian College of Kansas. His support and counsel over the decades was recognized by McPherson College with an Honorary Doctor of Laws degree and his induction into Central Christian College’s Academe of Achievers. He is survived by his wife Anita, son Darrell, grandchildren Erin Holman, Daniel Holman and Shannon Wise, sisters Lu Neher and Betty Wenger, his law partners, and legions of friends and clients. He was preceded in death by his daughter, Rhonda Holman and parents Jake and Ruth Wise. He was a member of the McPherson Church of the Brethren. The private family burial will be at the McPherson Cemetery with a celebration of Bob’s life for his countless friends to be announced when such gatherings are safe. In lieu of flowers, memorial donations may be given to McPherson College or the McPherson County Community Foundation in care of Stockham Family Funeral Home.

The family of Robert W. Wise created this Life Tributes page to make it easy to share your memories.

Send flowers to the Wise family.