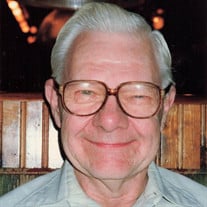 Robert “Bob” Louis Swan, 96, of McPherson, KS, passed away on Friday, October 1, 2021, at The Cedars Assisted Living Facility, McPherson. Bob was born on June 5, 1925, in Keokuk, Iowa, the son of Charles F. and Elizabeth (Barton) Swan. He graduated from Keokuk High School in 1943. After high school, he enlisted in the United States Army Air Corps and served during WWII. On July 15, 1944, Bob was united in marriage to Iris K. Coggeshall in Rogers Park, IL. She preceded him in death on September 3, 2010. He married Lena (Fast) Gookin in 2012, and she passed away on January 16, 2020. Bob worked at The Coleman Company in Wichita where he learned the tool & die trade. He then went to work for Nibarger Tool Service in Wichita. In 1975, Bob took a job in McPherson at Midwest Industries, where he was a tool & die maker, retiring in 1990. For several years following retirement, he continued part-time employment at Midwest Industries. He was a member of Emmanuel Bible Baptist Church, Galva. Survivors include: four children, Michael Swan of Las Vegas, NV, Marla Frisby of Gladstone, MO, Janet White (Crayton) of Trimble, MO, and Joy Schellenger (Ray) of Paris, TX; and numerous grandchildren, great-grandchildren, and extended family. He was preceded in death by: his parents, Charles & Elizabeth Swan; wives, Iris Swan and Lena Swan; a daughter, Lindee Griswold; and his siblings. The funeral service will be at 10:30 AM, Monday, October 11, 2021, at Stockham Family Funeral Home with Pastor Joseph Brown officiating. The family will receive friends from 9:30 AM until service time on Monday, October 11, at Stockham Family Funeral Home. Burial will follow the service at McPherson Cemetery. Memorial contributions may be given to Friendship Meals or McPherson Senior Center in care of Stockham Family Funeral Home, 205 North Chestnut, McPherson, KS 67460.

The family of Robert L. Swan created this Life Tributes page to make it easy to share your memories.

Send flowers to the Swan family.