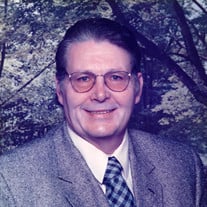 Robert “Bob” Dean Mitchell, 73, of Denver, NC and formerly of Zion, IL and McPherson, KS, passed away on Friday, March 2, 2018, in Charlotte, NC. He was a Quality Control Engineer at Johnson Outboard Marine Corp. in Waukegan, IL from 1967 to 1997. He then was a truck driver for JC Penney in North Carolina. Bob was born on September 15, 1944, in Antigo, Wisconsin, the son of William and Helen (Alsterlund) Mitchell. He graduated from Zion-Benton Township High School in Zion, IL in 1962. He attended NRI Automotive Servicing School and Greenville Township Technical College. Bob served in the United States Air Force from 1962 to 1966 and was a lifetime member of the American Legion in Zion, IL. He was a former member of Lakeview Church in Zion, IL where he helped with the Awana program and bus ministry. He also enjoyed bowling and playing golf. He was united in marriage to Janice Lynn Carlock on September 20, 1969, in Winthrop Harbor, IL. She died June 6, 1996. He married Judy Schwuchow in 1998 and Gayle Metts in 2001. He later married Kay Whisnant on July 12, 2006. Survivors include: wife, Kay Mitchell of Denver, NC; children, Kimber Mellinger (Royal) of McPherson, KS and Robb Mitchell (Doug) of Topeka, KS; sisters, Gloria Mason (Bill) of New Hampshire and Sharon Nelson of La Crosse, WI; two grandchildren, Doralynn Mellinger and Nickolai Mellinger; and numerous nieces, nephews, step-children, and step-grandchildren. He was preceded in death by: parents, William and Helen Mitchell; first wife, Janice Mitchell; brother, Gordon Mitchell; and sisters, Marilyn Maas and Donna Sutherland. A Celebration of Life service will be held at 10:30 AM, Saturday, March 24, 2018, at First Baptist Church, McPherson with Rev. Tom Griffith officiating. Military Honors will be provided by American Legion Post #24 and V.F.W. Post #2715. A private inurnment will be held at McPherson Cemetery at a later date. Memorial donations may be given to Robert Mitchell Memorial Fund in care of Stockham Family Funeral Home, 205 North Chestnut, McPherson, KS 67460.

The family of Robert D. Mitchell created this Life Tributes page to make it easy to share your memories.

Send flowers to the Mitchell family.