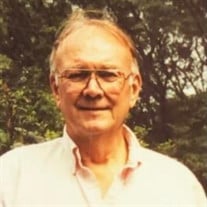 Robert Warren “Bob” Martin, 89, of McPherson, KS, passed away on Monday, November 23, 2020, at his home in McPherson. Bob was born August 10, 1931, in Lyons, KS, the son of Ralph W. and Mildred I. (Allen) Martin. On December 3, 1950, Bob was united in marriage to Charlene R. King. They celebrated 53 years of marriage before her passing on May 19, 2004. Bob graduated from McPherson High School in 1949. He was then employed by NCRA Refinery in McPherson before enlisting in the U.S. Navy in 1952. He served his country for four years during the Korean War. Bob later attended Kansas State University, graduating with a bachelor’s degree in mechanical engineering. He was employed as a mechanical engineer at Eastman-Kodak in Kingsport, TN, until his retirement in 1987. In 1988, Robert and Charlene returned to McPherson. Bob attended First Congregational United Church of Christ and was a member of V.F.W. Post #2715 and American Legion Post #24. He was also an active volunteer at the McPherson County Food Bank. Survivors include: a son, Michael Martin and wife, Margaret, of Lyons, KS; grandchildren, Michael Martin of Lyons, KS, Samantha Deck and husband, Michael, of Albuquerque, NM and Daniel Thouin and wife, Lacy, of Kingsport, TN; a great-grandchild, Garrett Deck; special friend, Connie Hallgarth of McPherson, KS; and many nieces, nephews, extended family, and friends. He was preceded in death by his parents, wife, and a brother, Keith E. Martin. A graveside service will be held at a later date in McPherson Cemetery. In lieu of flowers, memorial donations may be given to McPherson County Food Bank in care of Stockham Family Funeral Home, 205 North Chestnut, McPherson, KS 67460.

The family of Robert W. Martin created this Life Tributes page to make it easy to share your memories.

Send flowers to the Martin family.