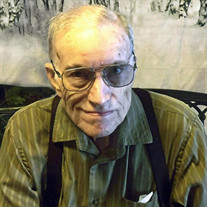 Robert E. “Bob” Laird, 88, of McPherson, KS passed away peacefully on Thursday, May 2, 2019, surrounded by family at The Cedars in McPherson. He was a telegraph operator and depot agent for the Rock Island Railroad from 1949 to 1980. He later worked for the Southern Pacific Railroad until retiring in 1993. He was born January 5, 1931, in Pratt, Kansas, the son of Thomas E. and Zoe May (Dailey) Laird. Bob graduated from Pratt High School in 1949. He made his home in Pratt until 1951 before moving to Kiowa County where he lived until 1971. Bob has made his home in McPherson since 1973. In 1950, Bob married Patsy O’Brien, and they were married 22 years. They had three daughters; Josie, Ruth, and Connie. Bob later married Dorothy M. (Schmidt) King Brunk on September 29, 1973, in McPherson. Her two children, David and Susan, became part of Bob’s ever growing family. Dorothy preceded him in death on September 4, 2012. Bob was a longtime member of First Congregational United Church of Christ, McPherson, where he served in the Cabinet and as head usher. He was currently attending First Christian Church. He was also a member of the Transportation and Communication Railroad Union. Survivors include: three daughters, Josie Blaser (Randy) of Littleton, CO, Ruth Baird (Bif) of Gateway, CO, and Connie Foster of Kansas City, MO; a step-son, David King (Debra Heigen) of Leavenworth, KS; a step-daughter, Susan Doud (David) of Las Vegas, NV; 12 grandchildren; and 18 great-grandchildren. A memorial service will be held at 2:00 PM on Monday, May 6, 2019, at Stockham Family Funeral Home with Rev. Lynn Scott Officiating. Inurnment will be in McPherson Cemetery. Visitation will be from 2:00 to 4:00 PM Sunday, May 5, at Stockham Family Funeral Home. Memorial donations may be given to the First Christian Church or American Heart Association in care of Stockham Family Funeral Home, 205 N. Chestnut, McPherson, KS 67460.

Robert E. &#8220;Bob&#8221; Laird, 88, of McPherson, KS passed away peacefully on Thursday, May 2, 2019, surrounded by family at The Cedars in McPherson. He was a telegraph operator and depot agent for the Rock Island Railroad from 1949 to... View Obituary & Service Information

The family of Robert E. Laird created this Life Tributes page to make it easy to share your memories.

Send flowers to the Laird family.