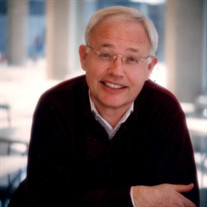 Robert “Bob” Owen Jonson was born in St. James, Minnesota on April 1, 1942. He was the second of four siblings to Roy and Verna Jonson. The family later moved to Wichita, Kansas in 1942 where Bob spent his early years growing up. The annual family summer vacation was a trip up to St. James, Minnesota to see family and friends. Bob’s first job was that of the neighborhood paper boy. He graduated from Wichita South High School and then attended Wichita State where he graduated with a BA in Biology in 1965. During Bob’s senior year at Wichita State, he met Carol while working at Wesley Medical Center. Eventually, they married in December 1964 at Salem United Methodist Church in Bushton, Kansas. Early years raising three sons were spent living in Omaha, Nebraska where Bob worked for ConAgra. The family made great memories staying busy with baseball, boy scouts, and trips to Colorado for skiing and hiking vacations. To his sons, Bob was everyone’s favorite April Fool as his birthdays were always a fun occasion. Bob loved the mountains and of course, all the fun gear that came along with it. In 1986, he moved the family to Carrollton, Texas working at the headquarters at Taylor Publishing. In his later years, he would work and retire with IBM. Bob enjoyed traveling following his retirement. Some of his favorite vacations were skiing trips to Colorado, watching sunsets in Santa Fe, Hawaii, Europe, Napa, and a Mediterranean Cruise with family and friends. He was always ready to play in the pool with his grandkids too. Known as Papa Jonson to them, he was infamous for always wearing a hat ready to have some fun! Bob entered into eternal rest on Friday, August 2, 2019. He was seventy-seven. He was a devoted husband, father, and grandfather, and his family will miss his sense of humor, witty conversations, and love for adventure. Bob is survived by his wife Carol; his sister, Janet Halliday of Scottsdale, Arizona; his three children, Jon and Jessica Jonson of Lincoln, Nebraska, David Jonson of Carrollton, Texas, and Mark and Pam Jonson of The Colony, Texas. He has six grandchildren, Marta, Annica, Elsa and Morgan of Lincoln, Nebraska and Nathan and Noah Jonson of The Colony, Texas. A memorial service will be held at 11:00 AM on Saturday, September 14, 2019, at Salem United Methodist Church in Bushton, KS with Pastor Tom Reazin officiating. Burial of cremains will follow at Salem UMC Cemetery, Bushton. In lieu of flowers, the family suggests memorials be given to Salem United Methodist Church Benevolence Fund (Bushton, KS) in care of Stockham Family Funeral Home, 205 North Chestnut, McPherson, KS 67460.

Robert &#8220;Bob&#8221; Owen Jonson was born in St. James, Minnesota on April 1, 1942. He was the second of four siblings to Roy and Verna Jonson. The family later moved to Wichita, Kansas in 1942 where Bob spent his early years growing up.... View Obituary & Service Information

The family of Robert O. Jonson created this Life Tributes page to make it easy to share your memories.

Send flowers to the Jonson family.