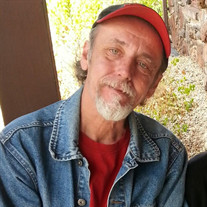 Randy L. Krause, 64, of McPherson, KS, passed away peacefully on Monday, August 27, 2018, surrounded by family at McPherson Hospital. Randy was born on May 28, 1954, in McPherson, KS, the son of Edison Elmo and Blanche Berniece (Sellers) Krause. He graduated from McPherson High School in 1972. He was a member of Grace Lutheran Church, V.F.W. Post 2715 Men’s Auxiliary, and Sons of the American Legion Squadron 24. Randy did a lot of things in his life. He did sound and lighting for the band, Tequila Jam. He taught himself to be an electrician. He had a green thumb. He was always coming up with creative and inventive ideas. He loved movies, books, and jokes. He was a devoted son, father, brother, uncle, grandfather, and friend. Survivors include: five children, Jonah (Liz) Krause of Des Moines, IA, Jennifer Bankole of Wichita, KS, Matthew (Kara) Krause of Canton, KS, Elizabeth (Danny) Paradise of Topeka, KS, and Alexander Krause of Galva, KS; God-Daughter, Amy Williams of McPherson, KS; mother, Blanche Berniece Krause of McPherson, KS; twin-sister, Renee Byrnes of Fairfield, PA; brothers, Ronnie Krause of St. Louis, MO and Roger (Ying) Krause of Goddard, KS; 15 grandchildren; and two great-grandchildren. He was preceded in death by his father, brother, Robert Krause, and grandson, Christopher Krause. A Celebration of Life will be from 3:00 PM to 7:00 PM, Saturday, September 1, 2018, at the McPherson American Legion Post #24. A private graveside service will be held at the McPherson Cemetery. Memorial donations may be given to the American Legion Post #24 in care of Stockham Family Funeral Home, 205 North Chestnut, McPherson, KS 67460.

Randy L. Krause, 64, of McPherson, KS, passed away peacefully on Monday, August 27, 2018, surrounded by family at McPherson Hospital. Randy was born on May 28, 1954, in McPherson, KS, the son of Edison Elmo and Blanche Berniece (Sellers)... View Obituary & Service Information

The family of Randy L. Krause created this Life Tributes page to make it easy to share your memories.

Send flowers to the Krause family.