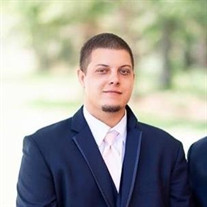 Nicholas James Gerard Jacobs May 21, 1993 – April 29, 2019 Nicholas “Nick” Jacobs, adored son, grandson, brother, uncle, paintballer and master barber, died on Monday, April 29, 2019. He was 25. Nick’s final moments were spent surrounded by his loving family – the people who were the center of his entire world. Nick was born on May 21, 1993, in St. Louis, Mo., the youngest child of Larry and Kelly Jacobs. The family relocated to Springfield, Mo., and Nick grew up there, living in constant awe of his older sister and brother, Kori and Jake. His childhood was spent happily playing with friends, boating with his family at the Lake of the Ozarks and spoiling Maggie, the family’s Yorkshire Terrier. Nick gravitated toward animals. For the last several years, he doted on his beloved dog, Blu, a Blue Heeler who rarely left Nick’s side. Nick battled mental illness for years of his young life. Like with any other disease, it was a part of Nick’s story, but it wasn’t all of it. He overcame seemingly insurmountable obstacles to live life on his terms. He graduated from Kickapoo High School in Springfield, Mo., in 2012 and moved to McPherson, Kan. In 2015, Nick earned a license from 360 Barber College in Wichita, Kan., and began cutting hair – a job he excelled at and loved. An avid paintball player, he joined a team and competed in a regional league, growing friendships along the way. Through everything, he never failed to remain close with his family. When his siblings began having children of their own, Nick became an uncle – and he was a natural in the role. He taught one of his nephews, Ben, to fist-bump and to jump. Whenever his other nephew, Aiden, would say to him, “Let’s go play,” Nick would never hesitate. And he was quick to hold his niece, Sophia, who was just born in February. Nick’s battle with mental illness, one that caused him to temporarily lose his sense of self, ended on Monday. In addition to his nephews and niece, Nick leaves behind his parents, Larry and Kelly Jacobs; his brother and sister-in-law, Jake and Mikaela Jacobs; sister and brother-in-law, Kori and Zach Laudner; grandmother, Renee Carroll; as well as aunts, uncles, cousins and friends who are grieving at their tragic loss. He was preceded in death by his paternal grandparents, Straud B. “Jake” and Marilyn J. Jacobs, and maternal grandfather, James “Jim” J. Carroll. Nick was a kind and goofy friend to all who knew him, a good-hearted kid who grew into a gentle and resilient man. That’s how he will be remembered. Nick’s legacy will live on. He donated his organs, a gift that has brought hope and life to multiple organ recipients. Visitation will be from 5:00 PM to 7:00 PM, Friday, May 3, 2019, at Stockham Family Funeral Home. The funeral service will be held at 10:00 AM, Saturday, May 4, at Stockham Family Funeral Home with Rev. Darren Frazier officiating. Burial will follow at McPherson Cemetery. Memorial donations may be given to National Alliance on Mental Illness (NAMI) in care of Stockham Family Funeral Home, 205 North Chestnut, McPherson, KS 67460.

The family of Nicholas Jacobs created this Life Tributes page to make it easy to share your memories.

Send flowers to the Jacobs family.