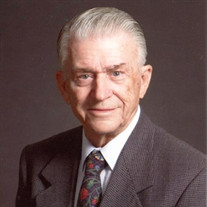 Melvin Irving Tarum, 92, of McPherson, KS, passed away peacefully on Sunday, February 9, 2020, with his children by his side at Brookdale in McPherson. He was born July 7, 1927, in Opheim, MT, the son of Atle and Jennie (Hansen) Tarum. Melvin graduated from Opheim High School in 1944 and received a Bachelor of Science degree in chemical engineering from Montana State in 1949. He served in the United States Navy during WW II from 1945 to 1946. On June 27, 1954, Melvin was united in marriage to Eunice Emily Bentson at Trinity Lutheran Church, McPherson. Together, they raised three children, Daniel, Julie, and Nancy. Mel and Eunice were married for 63 years before her passing on April 13, 2018. After 40 years at the NCRA Refinery, Melvin retired in 1992 as Manager of Product Supply and Distribution. Mel was a member of Trinity Lutheran Church where he served on the Property Committee. He was also a lifetime member of American Legion Post #24 and member of V.F.W. Post #2715. He served on the McPherson Planning Commission for 25 years, with six of those as chairman. He served on the McPherson Museum Board for 15 years, the McPherson Rotary Club for 16 years, the City Centennial Committee for the 1972 Centennial, Globe Refinery Committee, and on the Board of Directors of the Equus Beds Groundwater Management District. He is preceded in death by his parents, Atle and Jennie Tarum, wife, Eunice Tarum, brothers, Francis Tarum and Clarence Tarum, brother-in-law, Gail Stensland, sister-in-law, Marie (Tarum) Ostrem, and daughter, Julie (Tarum) Tidd. He is survived by son, Daniel Tarum of McPherson, KS; son-in-law and wife, David (Julie Tarum) Tidd and Laura Tidd of Iola, KS – David and Julie’s children: Joshua (Emily) Tidd and their son, Ezekiel Tidd, Joel (Leslie) Tidd, Jason Tidd, Jonathan Tidd, Jennifer Tidd, and Jessica Tidd; daughter, Nancy (David) Woodruff of Wichita, KS, and their children, Brandon, Kristin, and Ryan; sister, Elinor Stensland of Great Falls, MT; and sister-in-law, Rosalie Tarum of Great Falls, MT. The family will receive friends from 5:00 PM to 7:00 PM, Friday, February 14, 2020, at Stockham Family Funeral Home. The funeral service will be held at 10:30 AM, Saturday, February 15, at Trinity Lutheran Church with Rev. Tim Leaf officiating. Burial with Military Honors will follow at New Gottland Lutheran Church Cemetery. Memorial donations may be given to Trinity Lutheran Church Organ Fund, Montana State Engineering Dept., or McPherson Museum in care of Stockham Family Funeral Home, 205 North Chestnut, McPherson, KS 67460.

Melvin Irving Tarum, 92, of McPherson, KS, passed away peacefully on Sunday, February 9, 2020, with his children by his side at Brookdale in McPherson. He was born July 7, 1927, in Opheim, MT, the son of Atle and Jennie (Hansen) Tarum.... View Obituary & Service Information

The family of Melvin I. Tarum created this Life Tributes page to make it easy to share your memories.

Send flowers to the Tarum family.