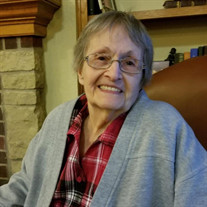 Mary Beth Newman, 89, of Marquette, KS, passed away peacefully on Saturday, December 18, 2021, at Riverview Estates, Marquette, KS. Before her retirement, she was employed as a bookkeeper for 23 years at Community Action Corporation in Wichita Falls, TX. Mary Beth was born on the family ranch in Archer County, TX, on July 5, 1932, to Charles Henry Williams and Elfrieda Clara (Paukner) Williams. She graduated from Holliday High School in 1949 and in January 1950 married Alvin N. Wigington. Through that union, they were blessed with four children: Rebecca, Debbie, Charles, and Mary Jane. Mary Beth was a woman of varied interests and accomplishments. As a child, she learned to ride horses and rope cattle to help her father and brothers in their business. When her Sunday school class needed a pianist, she volunteered her services. Mary Beth assisted in her children’s activities and served as Mother Advisor for Love Assembly #298 Order of the Rainbow for Girls. Socially, she joined Beta Sigma Phi and held several offices including President. As a chapter president and member of Beta Sigma Phi City Council, she was honored with the Outstanding President of the Year award for all of the chapters in Wichita Falls TX. Mary Beth also participated in the Social Order of the Beauceant and Eastern Star. She had a creative side and enjoyed needlework such as counted cross stitch, ribbon embroidery, and applique. Mary Beth was an accomplished seamstress who made many clothes for her children and grandchildren. She also loved to paint, especially outdoor and landscape scenes. Mary Beth was preceded in death by her parents, husband, John R. Newman, son, Charles Wesley Wigington, and brothers, David C. Williams, and Kenneth A. Williams. Survivors include: three daughters, Rebecca Hunt (Jeff) of Denton, TX, Debbie Hulse (Bobbie) of McPherson, KS, and Mary Jane Shoen (Joe) of Boise, ID; grandchildren, Benjamin Hulse (Mihan) of Thornton, CO, Courtney Engberg-Hulse (Jessica) of Grosse Pointe Park, MI, Cody Shoen of Boise, ID, Charles, Gabriel, and Nathan Wigington of the Dallas metro area; and great-grandchildren, Jane Marie Shoen, Ellasyn Ruth Engberg-Hulse, and Darius Alexander Hulse. Mary Beth’s wishes were to be cremated, and her Celebration of Life will take place in Texas at a later date.

Mary Beth Newman, 89, of Marquette, KS, passed away peacefully on Saturday, December 18, 2021, at Riverview Estates, Marquette, KS. Before her retirement, she was employed as a bookkeeper for 23 years at Community Action Corporation in Wichita... View Obituary & Service Information

The family of Mary Beth Newman created this Life Tributes page to make it easy to share your memories.

Send flowers to the Newman family.