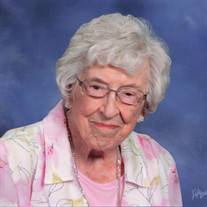 The Roaring Twenties were roaring, Warren Harding was President, the Readers Digest was first published, Eskimo Pies were patented, ice boxes were common in all kitchens, automobiles were becoming a household item and most importantly, Marjorie... View Obituary & Service Information

The family of Marjorie E. Stauffer created this Life Tributes page to make it easy to share your memories.

The Roaring Twenties were roaring, Warren Harding was President,...

Send flowers to the Stauffer family.