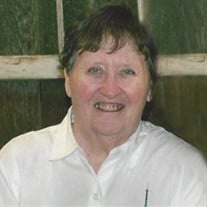 Margaret “Peggy” E. Curtis, 73, of McPherson, passed away on Saturday, January 14, 2017, surrounded by family at Via Christi Hospital St. Francis, Wichita. She was a homemaker.

Peggy was born on November 22, 1943, in Covington, Kentucky. She graduated from Whitehall-Yearling High School in Whitehall, OH and attended nursing school. On December 2, 1972, she was united in marriage to Larry Marvin Curtis in Shelby, OH. They were married 33 years before his passing on January 31, 2006.

She attended the Kingdom Hall of Jehovah’s Witnesses.

She was preceded in death by her parents, Mr. & Mrs. Kramer; husband, Larry; and brother, Cecil.

Memorial donations may be given to Harry Hynes Hospice or McPherson County Humane Society in care of Stockham Family Funeral Home, 205 North Chestnut, McPherson, KS 67460. To send flowers or a memorial gift to the family of Margaret "Peggy" E. Curtis please visit our Sympathy Store.

To send flowers to the family in memory of Margaret "Peggy" E. Curtis, please visit our flower store.
Send a Sympathy Card