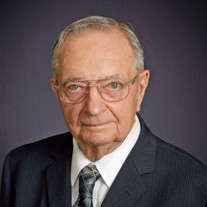 Lynell Vaughn Postier, 85, of McPherson, KS, passed away peacefully on Tuesday, March 20, 2018, surrounded by family at Angel Arms, McPherson. Lynell was born on December 8, 1932, at Grace Hospital, Hutchinson, KS. He attended South Liberty grade school and graduated from Inman High School in 1950. Lynell was raised on the family farm northwest of Inman. He had many fond memories of his childhood helping on the farm. He started plowing the fields at age eight. He belonged to 4-H and raised and showed cattle for his 4-H projects. He was very proud of his beautiful horse, Tony, that he broke all by himself. Lynell was united in marriage to Marilyn Spohn on February 2, 1957, at Monitor Church of the Brethren, Conway. This union was blessed with three children, Patricia Lynn, Gail Anne, and Darryl Ray. He was baptized on April 2, 1933, and confirmed March 30, 1947. After a serious accident in October of 1962, he realized his need for Jesus Christ as his Savior and accepted Him into his heart. In 1952, Lynell joined the Navy and was honorably discharged in 1956. He returned to work on the farm and to begin his 38 year career with the Board of Public Utilities as a lineman and Superintendent of Distribution for the last 15 years of his career. Upon retiring, he maintained the church grounds as his service to the Lord and did this as long as his health permitted. Lynell was very mechanical and could fix anything with a motor. He kept the family cars, his daughters’ cars, and farm machinery in top running condition. He enjoyed helping Darryl keep his BMX bike in racing condition. Lynell was a member of the First United Methodist Church of McPherson and the Partners in Christ Sunday school class. He is survived by: his wife of 61 years, Marilyn; two daughters, Patricia Cain (Jesse) of Shalimar, FL and Gail Schulz (Doug) of McPherson, KS; one son, Darryl Postier of McPherson, KS: six grandchildren, Angela McClenahan (Joe) of Shalimar, FL, Regina Weygandt (Sean) of Mountain Home Air Force Base, ID, Rachel Tolley (Garrett) of Shalimar, FL, Eric Schulz (Christen) of McPherson, KS, Amy Schulz of Austin, TX, and Heather Postier (Jason Swall) of Tulsa, OK; nine great-grandchildren, Alaina, Jenna, & Shanna McClenahan, Katelynn & Gavin Weygandt, Coulter & Palmer Schulz, and Kamilah & Amaya Swall. Lynell was preceded in death by his parents, Walter and Charlotte "Lottie" (Knackstedt) Postier, and sister, Winifred Stout. The funeral service will be at 10:30 AM, Monday, March 26, 2018, at First United Methodist Church with Rev. Darren Frazier officiating. Visitation/viewing will be held from 9:30 AM until service time, Monday, at the church. Burial will follow the service at McPherson Cemetery. Memorial donations may be given to First United Methodist Church, Hospice & Homecare of Reno County, or the Parkinson’s Disease Foundation in care of Stockham Family Funeral Home, 205 North Chestnut, McPherson, KS 67460.

The family of Lynell V. Postier created this Life Tributes page to make it easy to share your memories.

Send flowers to the Postier family.