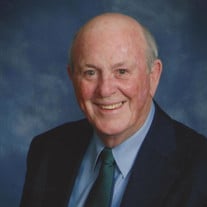 Linus Leo Linaweaver, 79, of McPherson, KS, passed away peacefully on Saturday, March 16, 2019, while in the company of family members at his home in McPherson. He was born December 5, 1939, in Lindsborg, KS, the son of Forest McKinley and Vera Gladys (Gordon) Linaweaver. Linus was the fourth of six children born to this union. Linus and Dee (Deloris Esau Loucks) were united in marriage on July 26, 1982. He was a United States Navy Veteran, joining the Navy in 1958. Linus was an Aviation Electrician and Nuclear Weapons Loading Chief. He had 22 months of sea duty in the Far East serving aboard the USS Ranger, USS Bonham Richard, and the USS Bennington which was the last wooden flight deck carrier. He was honorably discharged in 1962 after four years and four months. Linus returned to McPherson after military service and worked for Tom Brown Oilfield Service, Kit Manufacturing, and Mid-Plains Finance. During this time, he attended and graduated from Salt City Business College in 1964. In 1968, he joined McPherson & Citizens Bank as a retail loan officer. He successfully completed the Commercial Lending School of Banking in 1976. The bank name changed to McPherson Bank & Trust, and Linus was promoted to Senior Vice President in charge of the commercial banking division. He continued in that position through different regional bank changes – Fourth Financial Corp., Boatman’s Bank, and Nations Bank, and retired from banking in 1997. He obtained his real estate license and was a sales representative. First Bank Kansas opened a branch in McPherson, and in 1999, Linus became a consultant for them for one year, which turned into a 13 year commitment. During this time, he became a Director of First Bank Kansas. Linus was elected as McPherson County Commissioner 2nd district and began his first term in 2013. He was elected to a second term in 2016. Linus had served on the following Board of Directors: Multi Community Diversified Services (MCDS), McPherson Museum, Small Business Development Corp., First Bank Kansas, McPherson Convention & Visitors Bureau, and McPherson County Crime Stoppers. He was a member of American Legion Post #24, the unit of V.F.W. Post #2715, and First United Methodist Church. He was preceded in death by his parents; his brothers, Maynard, Clarence, Delbert, and Leo; and sister, Glova Flood. Linus is survived by his wife of 36 years, Dee; sisters-in-law, Verna, Mary, and Aggie; brother-in-law, Jim Flood; and numerous nieces and nephews. Visitation is scheduled from 3:00 PM to 7:00 PM, Wednesday, March 20, 2019, at Stockham Family Funeral Home with family receiving friends from 5:00 PM to 7:00 PM. The funeral service will be at 11:00 AM, Thursday, March 21, at First United Methodist Church with Rev. Karen Rice Ratzlaff officiating. A private burial with Military Honors will precede the service at McPherson Cemetery. In lieu of flowers, memorial donations may be given to First United Methodist Church or McPherson County Humane Society in care of Stockham Family Funeral Home, 205 North Chestnut, McPherson, KS 67460.

Linus Leo Linaweaver, 79, of McPherson, KS, passed away peacefully on Saturday, March 16, 2019, while in the company of family members at his home in McPherson. He was born December 5, 1939, in Lindsborg, KS, the son of Forest McKinley and... View Obituary & Service Information

The family of Linus Leo Linaweaver created this Life Tributes page to make it easy to share your memories.

Send flowers to the Linaweaver family.