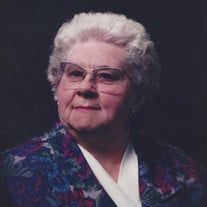 Leona Ruth Wedel, 88, of McPherson, KS, passed away peacefully on Tuesday, February 13, 2018, at Brookdale, McPherson. She was born April 2, 1929, in Derby, KS. She was the daughter of Hans Pete and Ruth Gay (Masterson) Sandstrom. A resident of McPherson since July 4, 1929, she attended McPherson schools, graduating in May, 1947. On June 15, 1947, she was united in marriage to Harold R. Wedel. He passed away October 13, 1987, after 40 years of marriage. To this union, four sons were born, Dennis, Douglas, Dwight, and Scott. She was a lifetime member of Trinity Lutheran Church where she taught Sunday school for many years and was a sponsor of Lutheran League for three years along with Harold and was always a strong supporter of Troop 133 of Trinity and Cub Pack 133. Leona retired in 1992 from the Register of Deeds and Appraiser’s office at McPherson County Courthouse after 17 years of service. Prior to that, she worked at Memorial Hospital in geriatrics, Montgomery Wards, and Friends Drug Store and several other places all in McPherson. She also served on McPherson County Council on Aging, McPherson Senior Center, and Friendship Meals Council. She is survived by: four sons, Dennis “Buffalo” Wedel of Little River, KS, Doug Wedel (Sharon) of Davenport, FL, Dwight Wedel (Patti) of Newton, KS, and Scott Wedel (Rhonda) of Overland Park, KS; sister, Genevieve “Jenny” Harold of McPherson, KS; five grandchildren, Joseph Wedel, Steven Wedel, Casey Wedel, Matt Wedel, and Justin Wedel; three great-grandchildren, Krista Wedel, Shawn Wedel, and Benjamin Wedel. She was preceded in death by her parents, husband, sister, Betty, and two grandchildren. The visitation will be held from 3:00 PM to 7:00 PM, Friday, February 16, 2018, at Stockham Family Funeral Home with family receiving friends from 5:00 PM to 7:00 PM. The funeral service will be at 10:00 AM, Saturday, February 17, at Trinity Lutheran Church with Rev. Tim Leaf officiating. Burial will follow at McPherson Cemetery. Memorial donations may be given to Trinity Lutheran Church, McPherson Special Olympics, or Disabled American Veterans in care of Stockham Family Funeral Home, 205 North Chestnut, McPherson, KS 67460.

Leona Ruth Wedel, 88, of McPherson, KS, passed away peacefully on Tuesday, February 13, 2018, at Brookdale, McPherson. She was born April 2, 1929, in Derby, KS. She was the daughter of Hans Pete and Ruth Gay (Masterson) Sandstrom. A resident... View Obituary & Service Information

The family of Leona Ruth Wedel created this Life Tributes page to make it easy to share your memories.

Send flowers to the Wedel family.