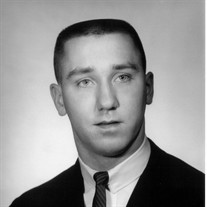 Larry Beam Heidebrecht, 75, concluded his earthly journey on Sunday, September 19, 2021, in Omaha, Nebraska, with his wife of 52 years by his side. His eternal journey in Heaven has begun. Larry was a warehouser at Johns-Manville for almost 30 years before he retired. He also worked at CertainTeed for almost 10 years. Larry was born in McPherson, Kansas, on May 4, 1946, the son of Ralph Franz Heidebrecht and Orpha Idella (Beam) Heidebrecht. He graduated from McPherson High School in 1964 and then attended McPherson College. In 1969 Larry married Kathy Ann Taylor in McPherson, where they lived together until three years ago when they moved to Omaha to be closer to family. Larry and Kathy were members of the First Baptist Church in McPherson for 40 years before they became members of the First Presbyterian Church in Omaha. Larry was a lifetime member of the B.P.O.E. and the Optimist Club, both in McPherson. He thoroughly enjoyed playing sports during his lifetime, especially baseball with the Babe Ruth team, football in high school, and softball with the All-Stars and other teams. One summer he played on four different softball teams! Following the Bullpups during any season was a must, especially when his son and daughter were participating. Larry loved to go hunting and had such perfect vision that he could see quail and pheasant a half mile ahead on the road! He was a scholar of the Civil War and enjoyed reading historical biographies, narratives, and non-fiction. Larry followed his favorite sports teams and often could rattle off a list of players and stats at any given moment. He also loved class reunions, where he sometimes portrayed the Great Karnac, and family reunions, and any reunions when the Aces were involved. And, oh, how he loved the Aces! He was known for his exquisite handwriting, perfect memory and perfect kindness, honesty and charity. Larry was also a meticulous accountant for the household, and rarely needed a calculator! He was a generous and hard-working provider for his family and always ensured his children could attend summer camps, take family vacations and excel in their interests, all of which generated so many wonderful memories. Larry particularly loved his canine and feline pets, who equally relished in his attentions and provided him great companionship throughout his life. No one could ever say an unkind word about Larry. Survivors include: His wife Kathy, Omaha, NE; two children, Matthew Taylor Heidebrecht (Inga), Omaha, NE, and Sarah Elizabeth Heidebrecht, Hanover, NH; his grandchildren, whom he adored, Lukas David and Markus James, both of Omaha, and Nova Lise of Hanover, NH; his brother, John "Babe" Stanley Heidebrecht of Wichita, KS, and numerous nieces, nephews, cousins, and friends. Larry was preceded in death by his parents and brothers, Carmon Ray Heidebrecht and Ralph Richard Heidebrecht. Honorary pallbearers are the original Aces: John Holecek, Mike Jones, Bob Kelly, Terry Rhea, Stu Wood and Michael Wood (deceased). The family will receive friends at Stockham Family Funeral Home in McPherson, KS, between 5:00 and 7:00 p.m. on Friday, October 1, 2021. Burial will be at the McPherson Cemetery at 9:00 on Saturday morning, October 2. A Celebration of Life will take place at the First Baptist Church in McPherson at 10:30, following the burial. To view a live stream broadcast of the service, please click on the following link: https://boxcast.tv/view/larry-heidebrecht-celebration-of-life-440855 In lieu of flowers, memorial donations may be given to the First Baptist Church of McPherson, the McPherson Animal Shelter or the Parkinson's Foundation, all in care of Stockham Family Funeral Home, 205 North Chestnut, McPherson, KS 67460.

Larry Beam Heidebrecht, 75, concluded his earthly journey on Sunday, September 19, 2021, in Omaha, Nebraska, with his wife of 52 years by his side. His eternal journey in Heaven has begun. Larry was a warehouser at Johns-Manville for almost... View Obituary & Service Information

The family of Larry B. Heidebrecht created this Life Tributes page to make it easy to share your memories.

Send flowers to the Heidebrecht family.