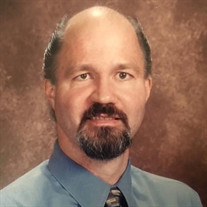 Jeffrey Thane Frazier, 58, of San Bernardino, California, passed away peacefully at home on February 10, 2019. Born and raised in McPherson, Kansas, Jeff graduated from McPherson High in 1979. He received his B.A. in Education from McPherson College. Jeff completed a Master’s degree in Education from Fort Hays State University. Jeff held several teaching positions in Kansas and in the San Bernardino area. For the past ten years, Jeff served as Head Librarian at Rialto High School (Knights), Rialto, California. On June 18, 1996, Jeff was united in marriage to Ellalyn Wells at the University United Methodist Church in Redlands, CA. Jeff served as advisor to the Knights of the Reading Table at Rialto High. He supervised many fundraisers for the advancement of literacy in the area. An accomplished bagpiper, Jeff was a Co-Founder of the City of McPherson Pipe Band. He served as its Pipe Major for five years. He instructed many beginning bagpipers in the McPherson area. Jeff had a huge interest in Scottish history, culture, and the genealogy of the Frazier family. He was very involved with an organization he helped organize in San Bernardino, The Scottish Society of the Inland Empire. Jeff was also an accomplished guitar and mandolin player. He was a huge fan of the early rockabilly sounds of Elvis Presley. Guitar influences were James Burton and Scotty Moore. Only upon request, Jeff was also a very respectable Elvis impersonator. Jeff is survived in death by: his wife Lyn; brother Mike Frazier (Beth) of Zionsville, Indiana; sister Jan Waring (Lawrence) of Johns Island, South Carolina; nephew Ben Frazier of Bloomington, Indiana; niece Annie Frazier of Minneapolis, Minnesota; and sisters-in-law, Nola Wells Sprague and Amy Wells Stohler. He was preceded in death by his parents, Jay and Pauline Frazier of McPherson. A memorial service will be held at 7:00 PM, Monday, March 25, at First United Methodist Church, McPherson with Rev. Karen Rice Ratzlaff officiating. Inurnment will be in McPherson Cemetery. Memorial donations may be given to First United Methodist Church in care of Stockham Family Funeral Home, 205 N. Chestnut, McPherson, KS 67460. Personal condolences may be sent to the family at www.stockhamfamily.com.

Jeffrey Thane Frazier, 58, of San Bernardino, California, passed away peacefully at home on February 10, 2019. Born and raised in McPherson, Kansas, Jeff graduated from McPherson High in 1979. He received his B.A. in Education from McPherson... View Obituary & Service Information

The family of Jeffrey T. Frazier created this Life Tributes page to make it easy to share your memories.

Send flowers to the Frazier family.